‘One day, it’s like a miracle, it will disappear’: Trump on Covid-19

As the US president tests positive, here’s timeline of some of his comments regarding coronavirus 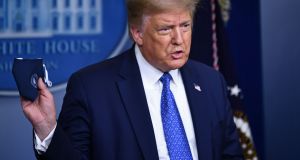 US president Donald Trump holds a facemask as he speaks to the press in July. Photograph: Brendan Smialowski/AFP

US president Donald Trump, in quarantine on Friday after testing positive for coronavirus, has underplayed the pandemic for months, eschewing masks, criticising others who wear them and holding large rallies with unmasked supporters against the advice of public health professionals.

While facing sharp criticism for his response to an outbreak that has killed more than 200,000 people in the United States alone, the president has touted his management of the crisis. Here is a timeline of some of his comments regarding coronavirus:

- January 24th tweet: “China has been working very hard to contain the Coronavirus. The United States greatly appreciates their efforts and transparency. It will all work out well. In particular, on behalf of the American People, I want to thank President Xi!”

- February 23rd to reporters: “We’re very much involved. We’re very, very cognisant of everything going on. We have it very much under control in this country.”

- February 27th at the White House: “It’s going to disappear. One day, it’s like a miracle, it will disappear.”

- March 10th after meeting Republican senators: “This was unexpected. And it hit the world. And we’re prepared, and we’re doing a great job with it. And it will go away. Just stay calm. It will go away.”

- March 13th to reporters: “Yeah, no, I don’t take responsibility at all, because we were given a - a set of circumstances and we were given rules, regulations, and specifications from a different time.”

- March 15th at a White House briefing: “This is a very contagious virus. It’s incredible. But it’s something that we have tremendous control over.”

- March 18th tweet: “I always treated the Chinese Virus very seriously, and have done a very good job from the beginning, including my very early decision to close the borders from China - against the wishes of almost all.”

- April 3rd at a White House briefing: “With the masks, it’s going to be really a voluntary thing. You can do it, you don’t have to do it. I’m choosing not to do it, but some people may want to do it and that’s okay ... As I greet presidents, prime ministers, dictators, kings, queens ... I don’t see it for myself, I just don’t.”

- April 23rd at a White House briefing: “I see the disinfectant, where it knocks it out in a minute, one minute, and is there a way we can do something like that by injection inside, or almost a cleaning. Because you see it gets in the lungs and it does a tremendous number on the lungs, so it’d be interesting to check that.” Pressed later about the issue, Trump said he was not encouraging people to ingest disinfectant and portrayed his remarks as sarcasm.

- May 21st on a Ford plant visit: “I wore one (a mask) in the back area. I didn’t want to give the press the pleasure of seeing it.”

- July 12th before publicly donning a mask for the first time: “When you are in a hospital, especially in that particular setting when you are talking to a lot of soldiers, people that in some cases just got off the operating table, I think it’s a great thing to wear a mask.”

- July 21st announcing a change of heart at a White House briefing: “We’re asking everybody that when you are not able to socially distance, wear a mask, get a mask. Whether you like the mask or not, they have an impact, they’ll have an effect and we need everything we can get... I will use it, gladly ... Anything that potentially can help ... is a good thing.”

- September 29th at a presidential debate, after producing a mask from his pocket: “I wear masks when needed. When needed, I wear masks.” Ridiculing Democratic rival Joe Biden for wearing them regularly, he said: “I don’t wear masks like him. Every time you see him, he’s got a mask. He could be speaking 200 feet away from them and he shows up with the biggest mask I’ve ever seen.”

- September 29th, when asked during the debate whether he was worried about the disease spreading at his rallies: “Well, so far we have had no problem whatsoever. It’s outside - that’s a big difference according to the experts. And we do them outside, we have tremendous crowds, as you see.... We had no negative, no negative effect. We’ve had no negative effect, and we’ve had, 35 40,000, people at some of these rallies.”–Reuters