‘It is what it is,’ says Fox News journalist following presidential show down 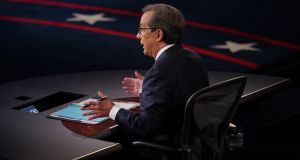 Chris Wallace, the Fox News journalist who acted as moderator during Tuesday’s chaotic US presidential debate between Donald Trump and Joe Biden, has spoken about the experience, saying: “I never dreamt that it would go off the tracks the way it did.”

At the start of the evening, when Trump first started speaking directly at Mr Biden, Wallace recalled thinking: “This was great – this is a debate!”, but it soon transpired that Mr Trump’s plan was to attempt to steamroller Mr Biden with constant hectoring interruptions.

“I guess I didn’t realise – and there was no way you could, hindsight being 20/20 – that this was going to be the president’s strategy, not just for the beginning of the debate but the entire debate”, Wallace observed.

On the reaction to his performance in the chair, Wallace said “I’ve read some of the reviews. I know people think, well, gee, I didn’t jump in soon enough.”

Describing the process on the night, the Fox News Sunday anchor said “You’re reluctant – as somebody who has said from the very beginning that I wanted to be as invisible as possible, and to enable them to talk – to rise to the point at which you begin to interject more and more.”

“First to say, ‘Please don’t interrupt,’ then ‘Please obey the rules,’ and third, ‘This isn’t serving the country well.’ Those are all tough steps at real time, at that moment, on that stage.”

Wallace said that as he told the two candidates “the country would be better served if we allowed both people to speak with fewer interruptions”, he felt “desperation”.

Speaking to the New York Times, Wallace refused to directly apportion blame to any one party for what happened during the debate. Asked if it had been Mr Trump who had derailed it, Wallace diplomatically said “Well, he certainly didn’t help. To quote the president, ‘It is what it is’”.

Wallace had previously moderated a 2016 debate between Mr Trump and Hillary Clinton, where his performance was generally well received, but of the the 2020 debate he said “I’ve never been through anything like this”.

Early numbers from the ratings organisation Nielsen suggest that the widely criticised debate was watched by 29 million viewers, markedly down on the 45 million who tuned in for the first Trump-Clinton debate in 2016. However, those figures do not include people who viewed it via online streaming. – Guardian