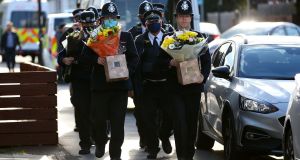 Tributes have been paid to Matiu Ratana, the Metropolitan Police officer fatally shot at a south London custody suite.

Sgt Ratana died in hospital after the gunman, who was being detained, opened fire at Croydon Custody Centre in south London during the early hours of Friday. The 54-year-old officer, known as Matt, had served with the Metropolitan police for nearly 30 years.

The 23-year-old suspect turned the gun on himself and was critically ill in hospital on Friday evening. Police had been about to run a metal detector over him when he managed, while handcuffed with his hands behind his back, to reach a revolver and open fire, shooting the sergeant in the chest and himself in the neck.

The suspect is understood to have been known to the government’s anti-extremism programme. He had previously been known to Channel, an arm of the government’s Prevent scheme that tries to stop people becoming radicalised, although the incident is not being treated as terrorism-related. The suspect had been flagged over concerns about both right-wing and Islamist indoctrination, sources said, but nothing of concern was found.

Mental health is also a consideration in the inquiry, with the suspect understood to have a learning disability – though whether this was a factor is yet to be determined.

Mystery surrounds how the shooting could have happened inside a supposedly secure area. The Guardian understands the suspect, who is believed to have Sri Lankan heritage, had been searched by officers away from the police station, and ammunition and cannabis were found.

On Friday night, the Independent Office of Police Conduct, which is investigating, said: “What we have established is that the man was arrested for possession of class B drugs with intent to supply and possession of ammunition. The man was handcuffed to the rear before being transported to Croydon custody suite in a police vehicle where he was escorted into the building. He remained handcuffed to the rear and seated in a holding area in the custody suite.

“His handcuffs remained in place while officers prepared to search him using a metal detector. It is at the point that shots were fired resulting in the fatal injuries to the officer and critical injuries to the man. A non-police issue firearm, which appears to be a revolver, has been recovered from the scene.”

The Metropolitan police commissioner, Dame Cressida Dick, said he was a “much-loved” officer.

She said he was known as a “big guy” with a “big heart”. She said: “A lovely man, respected by his colleagues, officers, staff and of course by members of the public, including, I may say, suspects arrested or dealt with in custody.”

She said he leaves a partner and an adult son from a previous relationship.

“He had a fantastic career, he gave 29 years of his life to the public of London, he has now tragically been killed on duty. His service will never be forgotten and we are deeply grateful for it and it is a really distinguished service from a lovely, lovely, much respected police officer.”

Ratana studied town planning at Massey University in the city of Palmerston North, on New Zealand’s North Island and attended high school in the same city. As well as serving as a police officer, Ratana was the head coach for East Grinstead Rugby FC.

Dick said he joined the force in 1991. “He was posted to Charing Cross, he worked as a constable on the streets of the West End and in Westminster in a variety of roles. Later, he served on our Territorial Support Group across the whole of London, often dealing with the most violent and dangerous criminals.

He worked as a constable in Hillingdon and was promoted to sergeant in 2010 where he worked in Hackney, first of all on a response team, then in a neighbourhood team before moving to Croydon in 2015.

Community police officer Jacqueline Kufuor told PA news agency that “Sgt Ratana was a lovely guy” and “the nicest man I have ever met”.

She said: “He was a very lovely man. He was such a nice man. When he sees you, he would just stand and talk to you. He would ask you about your job and how you’re coping and how you are doing out there. So when I ever had issues, I would just talk to him.”– Guardian News and Media 2020