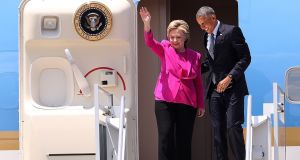 But he sidestepped any reference to FBI’s criticism yesterday of her “extremely careless” handling of classified information in her use of a personal email for official government business as as his first secretary of state.

Mr Obama appeared on stage next to Mrs Clinton in Charlotte, North Carolina yesterday, hours after FBI director James Comey criticised her use of a personal email address for government business during his first term in the White House but found that there was no grounds for a criminal prosecution.

The Democratic president, hoping to have his former secretary of state succeed him in the White House after November’s election, praised Mrs Clinton’s long experience in public life and her diplomatic work.

Mr Obama said he “had a front-row seat to her judgment and her commitment.” He contrasted her sharply with Donald Trump by ridiculing the presumptive Republican nominee and casting him as temperamentally unsuited to the Oval Office.

Unlike Mr Trump, he had “never heard Hillary Clinton demonize other people,” he said.

“There has never been any man or woman more qualified for this office than Hillary Clinton, ever. And that’s the truth!” Mr Obama proclaimed to a noisy audience of Clinton supporters in the Charlotte convention centre in North Carolina, a state he won in 2008 but lost four years later.

The one-time bitter rivals in the 2008 Democratic presidential primary appeared against the backdrop of a giant Clinton campaign poster emblazoned with her slogan: “Stronger Together.”

Mrs Clinton poked fun at Trump and his support of the so-called birther movement that claimed Mr Obama was not born in the United States.

She told the crowd that Mr Obama was someone who has never forgotten where he comes from “and Donald, if you’re out there tweeting, it’s Hawaii, ” she added.

The presumptive Democratic nominee referred to her past bruising election battles with Mr Obama, saying: “He knows a thing or two about winning elections, take it from me.”

Mrs Clinton travelled to Charlotte on Air Force One with the president, a move that was criticised by Mr Trump as a waste of taxpayers’ money. A spokesman for the Clinton campaign said that it would cover its portion of the travel costs.

At the rally, Mr Obama started his speech chanting “Hillary! Hillary!” rousing the crowd, standing on the same campaign stage for the first time since he endorsed her last month after she became the presumptive Democratic nominee with her defeat of Vermont senator Bernie Sanders.

Without mentioning Mr Trump by name throughout his speech, the president attempted to puncture the bravado of the presumptive Republican presidential nominee.

“Everybody can tweet but nobody actually knows what it takes to do the job until you sit down behind the desk,” said the president in a reference to Mr Trump’s propensity to comment on Twitter.

‘This is not a reality show’

Mr Obama, who appeared fired up with a first appearance on the presidential campaign trail in almost four years, mocked the New York billionaire’s reality-TV background, saying that that it was nothing like running for president.

“This is not a reality show - this is reality and being president of the United States means you have to deal with reality,” he said.

“When a crisis hits, you can’t just walk off the set. You can’t fire the scriptwriter. You can’t be reckless. You don’t have the luxury of just saying whatever pops into your head. You’ve actually got to know what you’re talking about. You’ve got to actually do your homework.”

Mr Obama said that he had seen Mrs Clinton’s “up close” and her involvement in making decisions taken in the White House and in her participation in those decisions.

“So the bottom line is that I know Hillary can do the job and that’s why I am so proud, North Carolina, to endorse Hillary Clinton as the next president of the United States,” he said.

He pointed to a Pew Research survey last week that found Mr Obama’s international rating was higher than for his predecessor, George W Bush, and that 63 per cent of of respondents surveyed across 10 European countries had a positive opinion of the US.

‘We were in a hole before I came into office’

“We were in a hole before I came into office but right now the rest of the world thinks we’re pretty darn great,” he said.

He attributed the country’s improved standing in the world to her work as secretary of state during the first term of his presidency.

Mrs Clinton understood that “a bunch of tough talk doesn’t replace the hard work of diplomacy, a bunch of phony bluster doesn’t keep us safe,” he said.

“And she understands we can’t retreat from a world that needs American leadership.”

Mr Obama concluded his speech saying that he had “run my last campaign” and that he “couldn’t be prouder of the things we’ve done but I’m ready to pass the baton.”

“I know Hillary Clinton is going to take it, and I know she can run that race,” he added.

While Clinton’s supporters were pleased with the FBI’s decision not to bring criminal charges, others were concerned about the effect of its criticism on her handling of sensitive information.

“I’m glad that it’s come to an end. I hope this is it. It has been going on for a long time,” said Ann Miano, an architect from Charlotte, standing at the back of Clinton’s campaign rally.

“It’s unfortunate,” said retiree Robert Eagle of the FBI’s criticisms. “It is like bad advice and bad decision making. I hope it does not hurt her.”