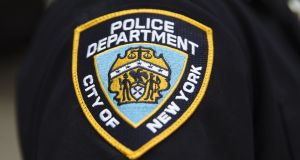 The NYPD officer had been suspended, hours after cellphone video was posted on social media that showed him holding his arm around the man’s neck during an arrest. Photograph: Angus Mordant/Bloomberg

A New York City police officer was arrested on Thursday morning and charged with illegally using a chokehold to subdue a man on the boardwalk at a Queens beach, becoming the first city officer to be charged under a new state law making it a felony for the police to use such holds.

The officer, David Afanador, had been suspended, hours after smartphone video was posted on social media that showed him holding his arm around the man’s neck during an arrest on the Rockaway Beach boardwalk. The man, Ricky Bellevue, 35, appeared to lose consciousness.

On Thursday, Afanador, 39, was charged under the new law with attempted aggravated strangulation, as well as strangulation in the second degree. He surrendered in the morning to the Queens District Attorney’s Office and was released without bail after a video arraignment later in the day in criminal court.

“The ink from the pen Gov. Cuomo used to sign this legislation was barely dry before this officer allegedly employed the very tactic the new law was designed to prohibit,” the Queens district attorney, Melinda Katz, said in a statement. “Police officers are entrusted to serve and protect, and the conduct alleged here cannot be tolerated.”

Afanador is the second New York City police officer to face criminal charges related to the use of excessive force this month. The arrests have come during mass protests across the country against police brutality, sparked when George Floyd died while an officer knelt on his neck in Minneapolis, one of several killings of Black people by the police and white vigilantes in recent months.

Afanador’s lawyer, Stephen C. Worth, said his client, a 15-year veteran of the department who lives in Long Beach, would “vigorously” fight the charges to save his career and pension. “This one should have been handled as a disciplinary matter, although I want to emphasise that this officer did absolutely nothing wrong,” he said in an interview after the arraignment. Spurred by the unrest, the New York state Legislature and New York City Council passed separate laws making it a crime for police officers to use chokeholds. The state law is named for Eric Garner, a Staten Island father who died in 2014 after a police officer used a chokehold on him during an arrest on suspicion of selling untaxed, loose cigarettes. Last year, the officer, Daniel Pantaleo, was found guilty at a departmental trial of using an unauthorised hold and was fired.

Knocked him to the ground

Afanador was among several officers who were responding to complaints about someone yelling at bystanders and kicking cans on the boardwalk Sunday morning, police said. The officers took Bellevue in custody and as they knocked him to the ground, Afanador used a chokehold for at least 10 seconds before letting go, the video shows. Afanador is Hispanic. Bellevue is Black. The felony charges suggest that investigators believe Bellevue may have briefly passed out because of the chokehold. If convicted, Afanador faces a sentence of up to seven years in prison, according to Katz’s office. Worth, the officer’s lawyer, said that it was common for an officer’s arm to end up around someone’s neck during a takedown. But in this instance, he said, his client had no intention to cut off Bellevue’s breathing. He said that in the smartphone video Bellevue had said that he had not lost consciousness.

The defense lawyer said prosecutors had rushed their investigation to satisfy “some imagined need” of the public to see officers arrested.

The district attorney’s office said it would not prosecute Bellevue, who was one of three men the police approached on the boardwalk. Bellevue’s attorney, Sanford Rubenstein, said the charges were a first step. “The next step is a trial, where we look for him to be convicted and get a sentence of jail,” he said. Video from Afanador’s body camera shows the officers talking to three men. Afanador comments in the video that he recognises one of the men, later identified as Bellevue, as a mentally ill man from a previous incident. The officers shrug off the men’s taunts for more than 10 minutes before Bellevue appears to reach into a trash can and pick something up. He asks officers twice if they are scared before Afanador lunges toward him. – New York Times News Service