Two municipalities in North Rhine-Westphalia back in lockdown 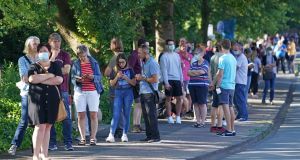 People wait in a line approximately 1km long to be tested for Covid-19 infection at the Carl Miele vocational school following a Covid-19 outbreak at the nearby Toennies meat packaging centre on Wednesday in Guetersloh, Germany. Photograph: Getty Images

German health minister Jens Spahn on Wednesday stressed that the coronavirus remains a risk after the western German state of North Rhine-Westphalia on Tuesday put two municipalities back into lockdown following an outbreak at a meatpacking plant.

Guetersloh and the neighbouring town of Warendorf became the first areas in Germany to fall back under lockdown measures that had been gradually lifted since the end of April.

“We’re seeing that if we make it too easy for this virus, it spreads very, very quickly again – we’re not only seeing that in Guetersloh – we’ve also seen it in Goettingen, in Leer, in Bremen and at churches and family celebrations,” Mr Spahn told German broadcaster ARD.

“That’s why it’s important to keep making clear that although the numbers were low over many weeks, this virus is still there,” Mr Spahn said.