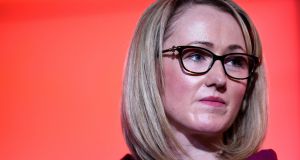 Rebecca Long-Bailey: Said that after posting a clarification, the leader’s office asked her to delete both her original retweet and the clarification. Photograph: Oli Scarff/AFP via Getty Images

Keir Starmer has sacked Rebecca Long-Bailey, his former rival for the Labour leadership, as shadow education secretary for sharing what he described as an anti-Semitic conspiracy theory.

Ms Long-Bailey had tweeted praise for an interview in which the actor Maxine Peake suggested that Israeli forces had trained US police to kneel on a suspect’s neck in the way that killed George Floyd.

“I asked Rebecca Long Bailey to step down from the shadow cabinet for sharing the article,” Sir Keir said.

“I didn’t do that because she is anti-Semitic, I did it because she shared the article which has got, in my view, anti-Semitic conspiracy theories in it. My primary focus is on rebuilding trust with the Jewish communities. I didn’t think sharing that article was in keeping with that primary objective.”

Ms Long-Bailey said she had issued a clarification of her retweet, which said “Maxine Peake is an absolute diamond”, making clear that she did not agree with everything Ms Peake said in the interview, and had agreed the wording with Sir Keir’s office. She said that after posting the clarification, the leader’s office asked her to delete both her original retweet and the clarification.

“I could not do this in good conscience without the issuing of a press statement of clarification. I had asked to discuss these matters with Keir before agreeing what further action to take, but sadly he had already made his decision,” she said.

In the interview with the London Independent, Ms Peake spoke about her support for Labour and discussed the police killing in Minnesota that has sparked weeks of protests around the world.

“The tactics used by the police in America, kneeling on George Floyd’s neck, that was learnt from seminars with Israeli secret services,” she said.

The paper quoted the Israeli police saying they had no such tactic or protocol and Ms Peake tweeted after Ms Long-Bailey’s sacking that her assertion had been inaccurate.

Sir Keir’s move won praise from Jewish groups and from some current and former Labour MPs but drew criticism from the left of the party, including from former shadow chancellor John McDonnell.

“Throughout discussion of anti-Semitism it’s always been said criticism of practices of the Israeli state is not anti-Semitic. I don’t believe therefore that this article is or Rebecca Long-Bailey should’ve been sacked. I stand in solidarity with her,” he said.

Meanwhile, Downing Street stood by housing secretary Robert Jenrick despite new revelations about his relationship with developer and former newspaper owner Richard Desmond. Under pressure from Labour, Mr Jenrick this week released documents showing that he sought to expedite a planning decision, sparing Mr Desmond from an obligation to pay £45 million for community infrastructure.

“Robert Jenrick has set out his account in public and to parliament, including publishing the relevant documentation, and in the light of this account the prime minister considers the matter closed,” Boris Johnson’s official spokesman said.