42% of those in Ischgl found to have antibodies, with vast majority asymptomatic 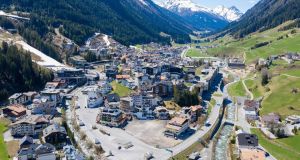 An aerial view of the village of Ischgl, Austria, in late April. Norway believes 40 per cent of its Covid-19 cases can be traced back to the Alpine village. Photograph: Johann Groder/EXPA/AFP via Getty Images

Four months after the Austrian Alpine resort of Ischgl achieved global notoriety as a Covid-19 super-spreader village, a new study suggests locals now have one of the world’s highest rates of virus antibodies recorded.

An investigation is under way into whether local politicians and business owners knowingly allowed thousands of revellers – from Iceland to Israel – carry home the virus from Ischgl aprés-ski parties.

After visitors left a research team from the University of Innsbruck moved in to test 1,473 locals – 80 per cent of the population – for Covid-19 antibodies. Some 42 per cent showed traces of antibodies in their blood, indicating an earlier infection.

Of those who tested positive, 85 per cent displayed no typical symptoms such as a cough or loss of taste and smell while only nine locals received hospital treatment.

“The results show that many corona cases remain undiscovered,” said Dr Peter Willeit, an epidemiologist at the Innsbruck University clinic, “and underline the importance of antibodies tests to examine the progress of the infection rate in the population.”

This information may play a crucial role in a class action lawsuit being taken by an Austrian consumer protection body against the Austrian state of Tyrol and the local officials and businesses in Ischgl.

About 1,000 skiers who were in Ischgl, including visitors from Ireland, have joined the lawsuit seeking answers and possibly compensation.

“If people with the first, perhaps unclear, symptoms had been tested then it would have been known and the authorities could have put the valley into quarantine a week earlier,” said Peter Kolba, the lawyer leading the class action suit. “That would have spared thousands of tourists an infection.”

A commission is already investigating the chain of events which led to the mass outbreak and the so-called Ischgl “Covid-19 catapult effect”.

On March 5th, Icelandic health officials warned their Austrian counterparts of 14 Covid-19-positive skiers just back from Ischgl. The Austrians suggested they could have picked up the virus on the plane home.

Soon similar clusters were reported among Ischgl returnees in Sweden, Germany and Denmark. Norway believes 40 per cent of its Covid-19 cases can be traced back to the Alpine village. It was eight days between the Icelandic warning and the shutdown of the village and ski slopes.

The search for the so-called patient zero has, until now, focused on a barkeeper from the popular Kitzloch bar who tested positive in early March.

Now investigators believe the first recorded Covid-19 case at the resort was in fact a waitress from the same bar – who complained of being ill in early February but only tested positive on March 9th.