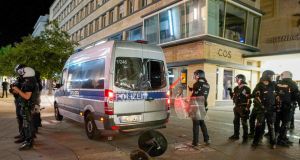 Officers stand next to a damaged police car in the downtown shopping area of Stuttgart: violence broke out after police carried out a drug check on a 17-year-old boy. Photograph: EPA/Kohls

Twenty-four people were arrested and 19 police officers injured after a check for drugs sparked attacks on officers and vehicles, followed by widespread vandalism in Stuttgart city centre over the weekend.

Several hundred people were involved in the disturbance, which started after officers stopped a 17-year-old on suspicion of drug possession as people partied outside at about 11.30pm on Saturday, police said.

Police said 40 businesses were vandalised and nine of them looted, while 12 police vehicles were damaged before officers brought the situation under control at about 4am.

One of the injured officers was hurt seriously enough to be considered unable to work, police said.

The violence had no apparent political motivation, police officials said at a news conference.

They said the teenage suspect initially stopped was a white German citizen, and that of the two dozen people arrested, half held German passports and half were citizens of other countries.

He said that more people were on the street on Saturday night because many clubs and discos remained closed due to the coronavirus outbreak and that the party scene in a central park had drawn people from the surrounding area.

“One cause was likely alcohol, another the addiction to social media film clips,” Mr Kuhn said.

Video taken on mobile phones purporting to be of events circulated widely on social media, with police asking witnesses to upload footage that could assist their investigation.