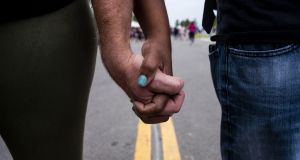 Thousands marched through US cities on Friday in Juneteenth observances marking the abolition of slavery more than a century and a half ago, an occasion freighted with special resonance this year amid America’s reckoning with its legacy of racism.

Capping nearly four weeks of protests and national soul-searching aroused by the death of a black man, George Floyd, under the knee of a white police officer, demonstrators took to the streets from Atlanta to Oakland, California, blending the Juneteenth holiday with calls for racial justice.

With many formal Juneteenth events canceled due to coronavirus concerns, activists instead organised a host of virtual observances online, as well as street marches and “car caravans” through several major cities.

While the gatherings were largely festive in mood, in keeping with Juneteenth traditions, they were also animated by demands for reforms to end brutality and discrimination in US police.

Organised labour joined in the movement, with union dockworkers at 29 West Coast cargo ports marking the occasion by staging a one-day strike. Numerous major US corporations declared June 19th a paid holiday this year, some for the first time.

Juneteenth, a portmanteau of June and 19th, commemorates the US abolition of slavery under President Abraham Lincoln’s 1863 Emancipation Proclamation, belatedly announced by a Union army in Galveston, Texas, on June 19th, 1865, after the Civil War ended.

Texas officially made it a holiday in 1980, and 45 more states and the District of Columbia have since followed suit.

Four Democratic US senators planned to introduce a bill to declare Juneteenth a federal holiday.

“Juneteenth is the oldest celebration of the end of slavery in the US. And it should be recognized as a federal holiday,” Senator Tina Smith, one of four, wrote on Twitter.

One focal point of Friday’s events was Atlanta, a center of the civil rights movement of the 1960s, where about 1,000 people gathered at Centennial Olympic Park downtown for a peaceful march on the state capitol building.

Emotions were running high in Atlanta, where Rayshard Brooks, an African American, was fatally shot in the back by a white policeman in the parking lot of a fast-food restaurant June 12th, reigniting outrage still simmering from Floyd’s death on May 25th in Minneapolis. The Atlanta policeman was dismissed from the department and charged with murder, although his arrest came more quickly than that of the officer ultimately charged with murder in the Floyd case.

Many Atlanta marchers carried signs proclaiming “Black Lives Matter,” or “Get your knee off our necks,” and “I can’t breathe,” referring to Floyd’s dying words.

Marcher Antonio Jeremiah Parks, 27, of Atlanta said the civil rights movement had not yet fulfilled its promises.

“Civil rights isn’t over,” said Parks, who is Black and works at a homeless shelter. “We still feel the pain of slavery. It’s not healed, and won’t be until we’re treated the same.”

Leia Shanks, 34, who is white and works in retail, said, “We need to stand against racism, and even though it’s 2020, what’s happening now isn’t right.”

In New York City, a few hundred protesters, most of them wearing masks against the spread of the coronavirus, gathered outside the Brooklyn Museum.

A diverse crowd, including parents with children in strollers and a large contingent of people on bicycles, marched in downtown Brooklyn, chanting “No justice, no peace” and “Say his name, George Floyd.”

In Texas, where Juneteenth originated, Lucy Bremond oversees what is believed to be the oldest public celebration of the occasion each year in Houston’s Emancipation Park. This year a gathering that typically draws some 6,000 people to the park was replaced with a virtual observance.

“There are a lot of people who did not even know Juneteenth existed until these past few weeks,” Bremond said.

Some 1,500 protesters gathered at the Port of Oakland to join local dockworkers in a work stoppage. The crowd was due to march to downtown Oakland, with many of the dockworkers driving in a caravan along the way.

But much of the annual observance was taking take place on social media, with online lectures, discussion groups and virtual breakfasts - organized as a safe alternative for a minority community especially hard hit by the pandemic.

“We have been training our staff on how to use technology to present their events virtually and online,” said Steve Williams, president of the National Juneteenth Observance Foundation. – Reuters