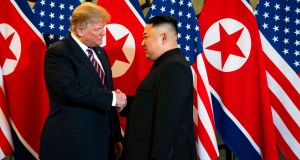 US president Donald Trump and North Korean leader Kim Jong-un at their meeting in Vietnam last month, at which they failed to reach an agreement. Photograph: Doug Mills/New York Times

US president Donald Trump announced he was reversing sanctions on companies related to North Korea on Friday, a day after the treasury department unveiled the measures.

In an unusual move by a sitting US president, Mr Trump undercut the decision by his treasury secretary Steve Mnuchin, announcing the reversal in a tweet: “It was announced today by the US treasury that additional large scale Sanctions would be added to those already existing Sanctions on North Korea. I have today ordered the withdrawal of those additional Sanctions!”

On Thursday the US treasury announced sanctions on two Chinese companies which it accuses of circumventing sanctions on North Korea. Officials said they had frozen the assets of shipping companies Dalian Haibo International Freight Co and Liaoning Danxing International Forwarding Co. It also banned US citizens from dealing with the companies.

It was announced today by the U.S. Treasury that additional large scale Sanctions would be added to those already existing Sanctions on North Korea. I have today ordered the withdrawal of those additional Sanctions!

“The maritime industry must do more to stop North Korea’s illicit shipping practices,” he said in a tweet, adding that “everyone should take notice and review their own activities to ensure they are not involved in North Korea’s sanctions evasion”.

But on Friday, White House press secretary Sarah Huckabee Sanders confirmed that the president had overridden the decision, pointing to Mr Trump’s relationship with North Korean leader Kim Jong-un. “President Trump likes Chairman Kim, and he doesn’t think these sanctions will be necessary,” she said.

Mr Trump failed to reach a nuclear deal with his North Korean counterpart at a summit in Vietnam last month, but has expressed hope that a breakthrough can still be achieved in encouraging the communist state to denuclearise.

The US president made his announcement as he arrived in his Mar-a-Lago estate in Florida, where he hosted leaders of several Caribbean countries on Friday afternoon. Mr Bolton was among the officials attending the meeting.

Earlier, Mr Trump declared that Islamic State had lost the last of its territory in the Middle East.

“Here’s Isis on election day. And here’s Isis right now,” he said to reporters as he displayed two maps showing the territory held by the terrorist group.

Despite his claims, heavy fighting was still reported late on Friday around the village of Baghouz in Syria. Mr Trump has repeatedly claimed that Islamic State has been defeated since he was elected president.