May should have taken my father’s advice on Brexit, says Donald Trump Jr 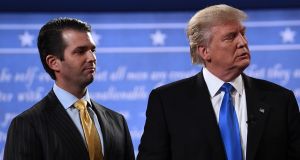 Donald Trump Jr and the US national security adviser John Bolton spoke out over Brexit on Tuesday in what appeared to be a coordinated intervention by the White House into British domestic politics.

Both the US president’s son and Mr Bolton attacked British political leadership after Theresa May said she would ask the EU for a delay to the UK’s exit from the European Union; in line with parliament’s wish.

In an article for the Daily Telegraph, Mr Trump Jr said May should have listened to his father’s advice over Brexit, saying that a “process that should have taken only a few short months has become a years-long stalemate, leaving the British people in limbo”.

According to the prime minister, Mr Trump advised her to “sue the EU – not go into negotiations”.

And, speaking to Sky News, Mr Bolton accused UK politicians of failing to “give effect” to the Brexit referendum result.

The UK has invoked article 50 – the formal process by which it can leave the EU – but is seeking a delay, after the terms upon which it would exit the bloc could not be agreed by parliament.

Mr Bolton added: “The president has been clear that he wants a resolution of this issue that allows the United States and Britain to come to trade deals again. He sees huge opportunity if Britain’s status can be resolved.”

Last week, the US president said he was “surprised at how badly” the Brexit negotiations had gone for the UK, but added at that point: “I think we will stay right in our lane.”

Mr Trump, who has sought to tear up many of the US’s existing trade agreements and seek terms he sees as more favourable to Washington DC, has previously said Mrs May’s Brexit withdrawal agreement “sounds like a great deal for the EU” and could prevent the UK from pursuing closer trade ties with the US.

Earlier this month, it was reported that Mr Trump had met the hard-Brexiteer and former Ukip leader Nigel Farage, who hinted that the US president was supportive of the UK leaving the EU without a deal in place. – Guardian