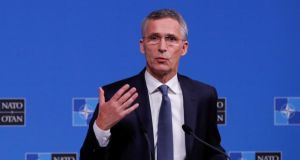 Nato has accused Russia of seeking to establish total control over the Sea of Azov, which three Ukrainian naval boats were trying to enter late last month when they were fired upon and seized by Russian ships.

The military alliance did not announce any new measures to deter Moscow, however, despite calls from Kiev to send warships to the area to boost maritime security around Russian-occupied Crimea and the Sea of Azov, which Ukraine and Russia legally share.

The Ukrainian ships and their 24 crewmen remain in captivity in Russia following the incident on November 25th, when Russian boats prevented them crossing the Kerch Strait from the Black Sea into the Sea of Azov.

It is the new flashpoint in a conflict that began in 2014, when Russia responded to Ukraine’s pro-western revolution by annexing Crimea and fomenting a war in eastern Ukraine that has now killed more than 10,300 people and displaced 1.6 million.

“Four years ago, Russia illegally annexed Crimea. Now, Russia is attempting to use Crimea to expand its influence and control the Sea of Azov,” Nato’s secretary-general Jens Stoltenberg said after a meeting of foreign ministers from its member states and Ukraine and Georgia.

“We call on Russia to immediately release the Ukrainian sailors and ships it seized. Russia must allow freedom of navigation and allow unhindered access to Ukrainian ports.”

Mr Stoltenberg noted that ships under Nato command have spent 120 days in the Black Sea this year compared with 80 last year, as it continues to strengthen its presence in the region “in response to Russia’s aggressive actions” of recent years.

“So there is already a lot of Nato in the Black Sea. And we will continue to assess our presence in the region,” he added.

Russia claims that Kiev’s ships tried to force their way into its territorial waters, as part of a “provocation” intended to boost Ukrainian president Petro Poroshenko’s dismal ratings ahead of elections next March.

The Kremlin has rejected western calls to free the ships and sailors, three of whom were injured in the incident, and they have been moved to prison in Moscow and charged with attempting illegally to cross Russia’s border.

Mr Poroshenko met relatives of the captured crewmen on Tuesday and insisted there was “nothing more important” to him that securing their release.

“They are prisoners of war under the Geneva Convention and are not subject to any Kremlin court,” he said, adding that Ukraine intended to take Russia to the UN’s international court of justice over the dispute.

Kiev said commercial ships were again starting to be allowed into and out of struggling Ukrainian ports on the Sea of Azov, having been subject to a Russian blockade since the naval clash.