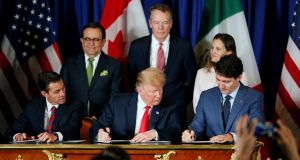 US president Donald Trump has joined the leaders of Canada and Mexico at a global meeting in Argentina to sign a revised North American trade pact that he called “groundbreaking” and a benefit for “working people”.

The US-Mexico-Canada Agreement is meant to replace the 24-year-old North American Free Trade Agreement, which Mr Trump has long denigrated as a “disaster”.

“It’s been long and hard. We’ve taken a lot of barbs and a little abuse, but we got there,” Mr Trump said of the pact.

Each country’s legislature must also approve the agreement but this could prove a difficult task in the US, especially now that Democrats - instead of Mr Trump’s Republicans - will control the House of Representatives come January.

Democrats and their allies in the labour movement are already demanding changes to the agreement.

While Mr Trump hailed the revised trade pact, Mr Trudeau was more measured, saying there was still work to be done and calling on Donald - using his first name - to remove steel and aluminium tariffs the US imposed on Canada and Mexico.

Mr Trudeau also referenced recent downsizing by General Motors in North America as a “heavy blow” but Mr Trump did not mention the job losses.

The signing came at the front end of two days of tough diplomacy for Mr Trump.

On the top of his agenda is a Saturday dinner meeting with Chinese president Xi Jingping, which will determine if the two can ease escalating trade tensions.

Before Mr Trump arrived in Argentina he injected additional drama into the proceedings by cancelling another high-stakes meeting, with Russian president Vladimir Putin.

On Friday, Mr Trump opened the day with a cordial meeting at the Casa Rosada with Argentine president Mauricio Macri, a longtime business acquaintance.

Posing for photos in the gilded Salon Blanco, Mr Trump spoke about their longtime personal relationship and said they would discuss trade, military purchases and other issues.

“We’ve known each other a long while,” Mr Trump said, noting he worked with Mr Macri’s father on real estate developments.

The businessman-turned-politician joked that when he and Mr Macri first met they would never have imagined their future roles on the world stage.

Mr Macri is hosting the summit as he struggles with problems at home.

He is trying to halt economic turmoil that has caused the steep depreciation of the Argentine peso.

Mr Trump, who arrived in Buenos Aires late on Thursday, barrelled into the two-day meeting by announcing via Twitter that he was cancelling a planned meeting with Mr Putin over Russia’s seizure of Ukrainian vessels.

His agenda for the weekend includes meetings with world leaders, as well as a number of heavily choreographed group activities for the gathering of leaders of rich and developing nations. - Agencies

Japan to release 1 million tonnes of contaminated Fukushima water into sea 07:35
Daunte Wright shooting: Clashes with police for second night in Minneapolis 06:38
US police officer who killed Daunte Wright may have meant to use taser 01:00
One person dead and police officer wounded in Tennessee high school shooting 00:12
Fatal Minneapolis shooting appears to be ‘accidental discharge’ 22:13