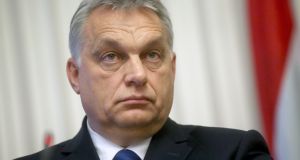 The disciplines of the EU accession process tend to have strong liberalising effects on the political cultures of states wishing to join the EU.

The political class understands that, whatever their autocratic instincts, concessions have to be made to exhaustive EU rule-of-law requirements that range from controls on corruption to structures to preserve judicial independence. Woe betide a country that closes down a free press or restricts academic freedom. Accession goes into cold storage.

The assumption had been that as long as one could copperfasten democratic values and structures at entry, backsliding – what they call euphemistically in Brexitspeak “regression” – was unlikely. And although the idea that the treaties should provide for a possibility of expulsion was discussed in the 2001, it came to nothing.

Kreko was speaking this week at a Brussels seminar at the European Policy Centre on “Europe’s illiberal states: How should the EU deal with Poland and Hungary?” A question it addressed was, does the EU have the right toolbox to deal with the new reality?

The emergence of Hungary’s illiberal “kleptocracy”, followed closely by Poland, with the Czech Republic, Slovakia, Romania and perhaps Italy lining up to embrace Hungarian leader Viktor Orban’s model, has exposed how poorly equipped the EU is to deal with the wholesale jettisoning by member states of its core political values.

Powerful Brussels institutions may police economic rules – the competition directorate is a match even for giants such as Google – but political rights in this “political union” are far less protected.

And mixed messages are sent – the centre right European People’s Party, to which Fine Gael is affiliated, continues to tolerate  the membership of Orban’s Fidesz party. That, Kreko says, speaks volumes about its willingness to tolerate almost anything. “In effect Hungary set the direction without serious consequences.”

Jaroslav Kaczynski, the former leader of the Polish ultra-conservative Law and Justice Party, promised “There will be a day when we install Budapest in Warsaw”. He has been as good as his word.

Both countries are face proceedings under the EU treaty’s article seven – theoretically they could have their voting rights suspended. But the draconian article, as we are finding, is largely toothless – any sanction can only be imposed by unanimous agreement of states, and the two bad boys are looking after each other’s back.

Lengthy discussions between the capitals and Brussels have generated little but heat.

Where the European Commission has been more successful putting manners on the wayward member states is in using infringement proceedings in the Court of Justice of the European Union (CJEU). An interim ruling by the court last month ordered Warsaw to suspend its early retirement of judges, suspending its attempt to rig the country’s supreme court.

The CJEU is considering several other cases against both countries, with lawyers predicting it will uphold claims against them, most notably, against Budapest’s  attempts to close down the George Soros-funded Central European University. It has already allowed challenges to extradition on the basis of complaints that prison conditions violate human rights.

Where reneging on rule-of-law commitments jeopardises the mutual trust between states that is at the basis of judicial co-operation, the court can be most effective. But in the Irish Celmer case involving the handing over of a suspect to Warsaw, the CJEU set a disappointingly high bar for defendants.

Ms Justice Aileen Donnelly was told by the court of justice that she could not hold up the execution of a Polish warrant unless she could show the breakdown of the rule of law in Poland was such as to threaten his trial directly. And she was told to engage in a direct discussion with the Polish court.

Petra Bard, a visiting law professor at the Central European University, told the seminar that was an “absurd dialogue”, requiring the judge to ask the Poles “are you impartial?”

The commission has been reluctant to use the threat to withhold structural funding. Its next budget rules will limit “conditionality” to cases where “generalised deficiencies impair sound financial management”. Or only where the EU budget is specifically threatened – that may pose problems for Hungary.

But supporters of the sharing of the burden of migrants, which Hungary is refusing to do, wonder why EU financial solidarity for development should be extended to a country that refuses such solidarity to migrants. The commission says it is also preparing a new mechanism for tightening rule-of-law cases to add to its toolbox. But Hungary and Poland give no appearance of being even slightly worried.