Reforms in stalemate for past two years, as leaders unable to agree on key elements 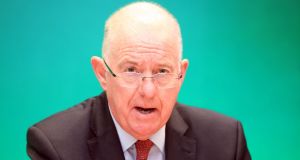 Last summer’s forlorn hopes that EU leaders could use their December summit to agree a comprehensive package of badly needed reforms of their common asylum system were finally dashed on Thursday.

Five of the seven elements of the package dealing with one of the key polarising challenges facing the EU are ready for formal approval, but the last two remain far from agreement.

These include the reform of the controversial Dublin directive, which defines which state has the obligation to evaluate the asylum claims presented by people who arrive in Europe.

Some diplomats have expressed concern that the Austrian presidency of the EU has let the file slip since June. The reforms have been stalemated for the past two years, and Austria has been an opponent of compulsory national quotas and burden-sharing.

The European Commission proposed last week that ratification of the five agreed elements should go ahead, but eight member states on Friday clearly opposed “decoupling” the package and those parts of Dublin which are acceptable.

Supporters of increased “solidarity” between member states – the sharing out of asylum seekers throughout the EU to relieve the burden on frontline states  – fear that any incentive to reluctant states to agree such measures will disappear if the other measures are approved on their own. They also point to interlocking elements in the five regulations which reference the Dublin directive.

Among the measures in the package are agreements on common procedures and qualifications for asylum protection and returns, and the establishment of Eurodac – a common fingerprint database for applicants.

On his way in to the meeting, Minister for Justice Charlie Flanagan said further momentum on the reform of the common European asylum system was required “along with continued efforts to tackle the people-smugglers who exploit vulnerable migrants”.

“Through our participation in the UN naval mission ‘Operation Sophia’, Ireland is playing a key role in targeting migrant-smugglers in the Mediterranean. We have also shown solidarity with Italy and Malta over the summer months in accepting migrants from search and rescue missions,” he said.

Leaders next week, however, will be discussing commission proposals for a beefing up of the European Border and Coast Guard Agency, Frontex. The commission wants to see it have some 10,000 border guards by 2020. Agreement on numbers and most of its mandate remains some way off, however.

On Thursday, ministers agreed to allow Frontex to provide technical and operational support to member states in operations returning failed asylum seekers to their home state.

The agreed rules will also contribute to strengthening co-operation with third countries, including the possibility of concluding agreements that would allow for the deployment of border management and return teams and for operations in the territory of third countries.

The agency will also be able to deploy experts as liaison officers, who will form part of the local or regional co-operation networks of immigration liaison officers and security experts of the EU and the member states.

Justice ministers also agreed a declaration on anti-Semitism that endorsed the definition promulgated by the International Holocaust Remembrance Alliance (IHRA).

The alliance’s definition has proved controversial, with critics warning that it can be interpreted as delegitimising some forms of criticism of the Israeli state, notably from boycott and disinvestment campaigners. Commission officials insisted that the legally non-binding definition was not seen as inhibiting genuine political debate.

Meanwhile, the ministers agreed their negotiating position for talks with the European Parliament on the proposed regulation on preventing the dissemination of terrorist content online. “With this agreement we want to send a strong signal to internet companies about the urgency of addressing this issue,” said Austrian interior minister Herbert Kickl.

Online service providers will have to remove terrorist content or disable access to it within one hour of receiving a removal order from authorities. If a provider fails to comply, they may be liable to a penalty of up to a maximum of 4 per cent of their global turnover for the previous year.

And service providers will have to apply certain duties of care to prevent the dissemination of terrorist content on their services, which may vary depending on the risk and level of exposure of the service to terrorist content.

1 Storm Dennis washes abandoned ‘ghost ship’ onto rocks off Co Cork
2 Everything you need to know about pensions but were afraid to ask
3 Fine Gael faces internal resistance to a grand coalition with FF and Greens
4 Caroline Flack death: Public disquiet over media conduct grows
5 Forget a grand coalition – here is what the next government will most likely look like
Real news has value SUBSCRIBE