Maureen Dowd: Walking a line between Covid-19 and Trump 2020 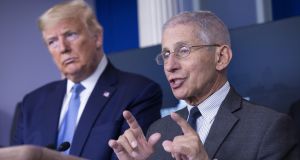 US president Donald Trump and Dr Anthony Fauci, director of the National Institute of Allergy and Infectious Diseases, during a Coronavirus Task Force news conference at the White House on Saturday. Photograph: Stefani Reynolds/CNP/Bloomberg

It’s not easy being a national treasure. “I’m exhausted,” confessed Dr Anthony Fauci when I reached him Thursday evening in the middle of another 18-hour workday.

“I have changed my tune a bit, probably thanks to my wife,” said the 79-year-old director of the US National Institute of Allergy and Infectious Diseases. “About a week ago, I was going about four or five days in a row on about three hours of sleep, which is completely crazy, ’cause then I’ll be going on fumes. The last couple of nights, I’ve gotten five hours’ sleep, so I feel much better.”

He said he misses the endorphins of power-walking, and he is wracked when he gets home at midnight and it’s too late to answer calls and emails. “I gotta get rid of this guilt feeling,” he murmured about that moment’s 727 emails.

He said he has not been tested for the coronavirus but takes his temperature every day and usually has it taken another couple times before White House press conferences and meetings in the Oval office.

When I spoke with him, he had been missing from the White House briefing for two days and Twitter blew a gasket, with everyone from former national security adviser Susan Rice to Democrats’ impeachment adviser Laurence Tribe seeking an answer to the urgent query, “Where is Dr Fauci?”

Donald Trump, the ultimate “me” guy, is in a “we” crisis and it isn’t pretty. The president is so consumed by his desire to get back his binky, a soaring stock market, that he continues to taffy-twist the facts, leaving us to look elsewhere – to Fauci and governors such as Andrew Cuomo and Gavin Newsom – for leadership during this grim odyssey.

Fauci chuckled at speculation that he was banished due to his habit of pushing back on Trump’s hyperbolic and self-serving ad-libbing.

“That’s kind of funny but understandable that people said, ‘What the hell’s the matter with Fauci?’ because I had been walking a fine line; I’ve been telling the president things he doesn’t want to hear,” he said. “I have publicly had to say something different with what he states.

I don’t want to act like a tough guy, like I stood up to the president. I just want to get the facts out

The first time I talked to Fauci was during a panic in the mid-1980s about stopping another virus, the cause of the heartbreaking Aids crisis. Then, as now, he was honest, brave and innovative. He told me that he tries to be diplomatic when he has to contradict the president about what “game-changer” cures might be on the horizon and whether everyone who wants to be tested can get tested.

“I don’t want to embarrass him,” the immunologist said, in his gravelly Brooklyn accent. “I don’t want to act like a tough guy, like I stood up to the president. I just want to get the facts out. And instead of saying, ‘You’re wrong’, all you need to do is continually talk about what the data are and what the evidence is.

On Friday, a trigger-happy Trump was so quick to talk up the fabulous possibilities of an anti-malarial drug in combating the virus that Fauci had to pump the brakes, taking the microphone to explain that we do not know yet because controlled testing is needed.

The president returned to the lectern to press his unscientific case and compliment himself: “I’m a smart guy,” he said. “I feel good about it. And we’re going to see. You’re going to see soon enough.”

Probably thinking about all his government staffers working round-the-clock, Fauci could not help rubbing his forehead and cheek – going against his own advice to the public – when Trump cracked a joke about the “deep state department”.

Although the scientist listens respectfully when the president and the vice-president are talking, he somehow manages to emit an “oh my God, please don’t say that” vibe when the two men scamper over the line. When Mike Pence went into false-hope overdrive, saying, “I just can’t emphasise enough about the incredible progress that we have made on testing,” Fauci and Dr Deborah Birx, the administration’s virus response co-ordinator, exchanged a whispered aside that sent the internet into a frenzy.

He wants to think of himself as a wartime president, but he can’t rise above his pettiness and defensiveness

Fauci assured me that, despite their crosscurrents and an early overconfidence about how easy it would be to control the path of the virus, the president “absolutely” now gets the threat of “the invisible enemy”, as Trump calls the virus.

Still, Trump managed to have an hour-long press conference about public health guidance in which he relentlessly ran afoul of public health guidance. He wants to think of himself as a wartime president, but he can’t rise above his pettiness and defensiveness long enough to stop trashing White House reporters who are simply trying to do their job under perilous circumstances. He also can’t move away from his old standby, xenophobia.

Trump has never understood anything about government, so he doesn’t know what the Centers for Disease Control and Prevention versus the Food and Drug Administration versus the Federal Emergency Management Agency should do.

His improvisational leadership style was vividly – and disturbingly – on display on Friday during a call with Chuck Schumer, who urged him to invoke the Defense Production Act to get ventilators and masks to desperate states – despite the president’s cavalier remark a day earlier that the federal government is “not a shipping clerk” for the states. “Then Potus yelled to someone in his office to do it now,” a Schumer spokesman reported.

Trump is just a petrified salesman who believes in perception over reality. He thinks if he can create the perception that this is going to be a quick fix and there’s a little pill coming, then the stock market will roar back, along with his 2020 momentum.

With Franklin D Roosevelt and the Great Depression, the only thing to fear was fear itself. With Trump and our new abyss, we have to fear not only fear but also the ignorance and misdirection of the White House and the profiteering of senators. Not to mention the virus.