Canada to give income support during outbreak 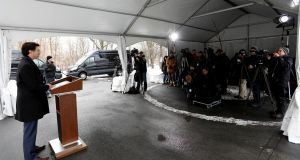 Prime minister Justin Trudeau said on Tuesday that the Canadian government would provide financial support to people as he urged them to stay at home to slow the spread of coronavirus.

“We’re going to be flowing income supports to millions of Canadians,” Mr Trudeau said in a radio interview. Details of the measures would be outlined on Wednesday, he said.

In the meantime, “everyone who can stay home should stay home”, he said, “to prevent our medical system from getting overloaded” during a crisis that could last months.

The death toll in Canada rose to five on Tuesday after Ontario, the hardest hit province, reported its first death. There have been more than 440 infections across all 10 provinces.

“We are hard at work to create the right support package for Canadians while protecting people’s jobs and our economy,” Mr Trudeau told reporters in a news conference in front of his home, where he has been in quarantine since his wife tested positive for Covid-19 last week.

Direct support for people who do not qualify for unemployment benefits and money for businesses that keep people on the payroll even if they stay home are among the possible measures, Mr Trudeau said.

Other measures could include greater access to credit for businesses, help for those struggling with mortgages, an increase to childcare benefits, and more support for low-income families.

Furthermore, tax adjustments will be announced by the end of the week to give people “more flexibility...to make payments, and for businesses to have more liquidity at this time”, Mr Trudeau said.

The Liberal government is working to reconvene the House of Commons “so that we can bring in emergency economic measures”, Mr Trudeau said.

Also on Tuesday, the Bank of Canada decided on a surprise interest rate cut on Friday because it concluded there could be “considerable benefit” to an immediate reduction amid the uncertainty caused by coronavirus. – Reuters