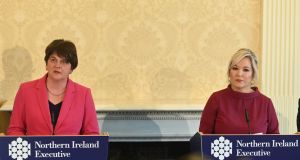 A second patient has died of coronavirus in Northern Ireland.

The Department of Health (DoH) said the patient was elderly, had an underlying medical condition and was being treated in hospital.

The Health Minister, Robin Swann, sent his “deepest condolences” to the patient’s family and friends.

The North recorded its first death from coronavirus, also known as Covid-19, on Wednesday.

According to the latest figures, released on Sunday afternoon, 20 new positive cases of coronavirus have been identified in the North in the last 24 hours, bringing the total number of confirmed cases to 128. The number of tests carried out stands at 2,484.

For the first time, the DoH has released a breakdown of the age and gender of those diagnosed with the disease.

Seventy-three of those diagnosed are men, and 55 are women.

Mr Swann said the “ heart-breaking news” that another patient had died in the North “should bring it home to every one of us that coronavirus is a real and present danger across our community,” he said.

“It is essential that we all follow the public health advice on keeping a safe distance, washing our hands and staying at home.

He said there had been “concerning” reports of a minority of people who are flouting our social distancing advice.

“These behaviours are putting the people themselves, their families and their friends and neighbours at risk.

“Coronavirus is a threat across generations and all walks of life. We all need to unite to fight against it.”

A patient in NI who tested positive for Covid-19 has sadly died. The patient was elderly, had an underlying medical condition and was being treated in hospital.https://t.co/IycxJRpDTO pic.twitter.com/pMR7o0DWDS

Earlier, the North’s First Minister said emergency legislation would be used if necessary to enforce social distancing in an attempt to stop the spread of the virus.

Speaking on the BBC’s Sunday Politics show, Arlene Foster said necessary legislation would finish its passage through the House of Commons on Monday.

“There will be legislation which will allow us to enforce social distancing and enforce all of these measures,” she said. “Of course, one doesn’t want to have to go down that road but really it appears that in some cases we are going to have to enforce it.”

The North’s Finance Minister Conor Murphy has written to the UK chancellor asking him to extend the UK government’s financial support to self-employed and other workers who fall outside of the scope of the support package announced on Friday.

The UK government will pay up to 80 per cent or £2,500 (€2,700) of the wages of employees who would otherwise be laid off because of coronavirus.

“This has reassured many people that their jobs and livelihoods will be sustained during this unprecedented health crisis,” Mr Murphy said.

“However, many workers, including sole traders, the self-employed, people on zero hour contracts, and agency workers fall outside the scope of the scheme.

“This is causing huge anxiety and I urge you to take urgent action to support them also.”

Widespread closures and social distancing measures were among the policies announced by the UK government on Friday in a bid to halt the spread of the virus. “If needed, the government will enforce these measures by law,” it said.

The Police Service of Northern Ireland (PSNI) warned on Friday that young people had been gathering to mark the end of their school year.

In the Larne and Carrickfergus areas of Co Antrim, the PSNI said their officers had had to disperse about 300 teenagers, the majority of whom had met up for end of year parties.

“Ninety five per cent of the young people we encountered were polite, respectful and headed home when we explained the dangers of social gatherings,” the PSNI said on social media.

The Justice Minister Naomi Long has been in discussions with MLAs about the enforcement of social distancing. The chair of the justice committee, the DUP MLA Paul Givan, said on social media that he would “work closely with Naomi Long to ensure every law needed is in place to enforce the instructions being given to protect our community. Ignoring advice cannot be tolerated.”

Many shops and supermarkets in the North have taken measures to ensure customers comply with social distancing, including the use of tape or other designated markings to make sure people keep the recommended 2m apart while queuing.

Asked if she envisaged the scenario, as has been introduced in other European countries, where people were legally required to stay at home and could only go out with permission, Ms Foster said “we certainly don’t want to be in that position.

“We hope people will heed the advice and heed what is being said ... but I think some people will not move until these matters are enforced.

“I think that’s sad, but that’s unfortunately that is case.”

The Deputy First Minister, Michelle O’Neill, said the North’s Executive would have to do whatever was necessary to protect people. “I think that’s where we will end up,” she said.

Ms O’Neill was speaking on the BBC’s Sunday Politics programme in a rare joint interview with Ms Foster.

“I think it’s reckless of some people to still be gathering,” she said, and appealed to young people to play their part in “trying to save lives.”

She also said every business that was not an essential service should be shut down. “That is where we are going here in terms of our approach to tackling what is such an unprecedented situation.

“Please don’t be reckless. Employers that are still asking your staff to come in to work, if you’re not an essential service, please shut down.”

Ms Foster also said the Department of Health had been in contact with private hospitals in the North with regard to making their facilities available to the NHS. “If they are able to assist I understand they are going to do so,” she said, adding that she expected an announcement “very soon”.

A number of manufacturers have also come forward to offer to reorientate their businesses to the manufacture of medical equipment.

Schools in the North are to be closed to pupils from Monday, but some will remain open in a limited capacity to supervise the children of key workers.

The Education Minister, Peter Weir said on Sunday that this was to “cater for children of at least one key worker parents to facilitate them getting to work to fight the virus, but only where there is no other viable option to make other arrangements.

“If you can use an alternative don’t send your child to school,” he said.