‘Inevitable disruptions’ on way whether or not deal is agreed, document points out 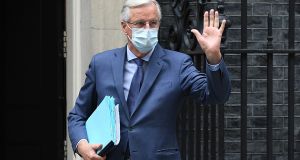 The European Commission has warned of the need for citizens, businesses and national authorities to prepare for deep changes in the trading relationship between the European Union and Britain from January irrespective of whether a breakthrough can be found in stalled negotiations with London.

A new document published by the executive lays out that UK driving licences may no longer be recognised by EU countries, that free mobile phone roaming agreements will cease, and that passengers travelling between the EU and UK will no longer be covered by EU passenger rights such as those guaranteeing refunds for cancelled flights.

It gives sector-by-sector advice on the changes to come, warning that customs formalities will come into place, and businesses selling services into the EU will need to demonstrate compliance, whether or not a deal is reached between London and Brussels by the end of the year.

“Inevitably, the fact that the United Kingdom will no longer participate in Union policies as of the end of the transition period will create barriers to trade in goods and services and to cross-border mobility and exchanges that do not exist today” the document warns.

“The choices made by the United Kingdom’s government on the future relationship and on not extending the transition period mean that these inevitable disruptions will occur as of 1 January 2021 and risk compounding the pressure that businesses are already under due to the COVID-19 outbreak.”

The document was released ahead of the conclusion of this week’s talks in London on the future relationship between the EU and UK, which the bloc’s chief negotiator Michel Barnier warned had failed to bridge differences.

“This week’s discussions confirm that significant divergences remain between the European Union and United Kingdom,” Mr Barnier said as the document was released. “Regardless of the outcome, there will be inevitable changes.”

With talks stalled for months and disrupted by the coronavirus pandemic, the EU and national governments have been readying information campaigns to instruct stakeholders on what needs to be done in case a deal cannot be reached.

But authorities warn that even if an agreement is signed, unpicking decades of co-operation means there will be abrupt changes in January in areas as diverse as tourism, electricity exchange, and intellectual property law.

Under the withdrawal agreement reached last year, checks are to take place on goods as they move between the island of Ireland and Britain, avoiding the need for a hardening of the land border, but significant costs and disruption still lie ahead for businesses doing trade into the island of Britain.

In particular, significant work on compliance lies ahead for companies that export goods between the EU and UK and in financial services, transport, audiovisual media, and energy services, the document warns.

“It is essential that all stakeholders be made aware of this, and that they ensure their readiness for these broad and far-reaching changes, which will arise under any scenario, regardless of the outcome of negotiations between the European Union and the United Kingdom,” it reads.

“There is no room for complacency or postponing readiness and adaptation measures in anticipation that an agreement would ensure continuity, because a large number of changes will be inevitable.”