Coronavirus: Cases surge in southern US states as Italy and Germany hold steady 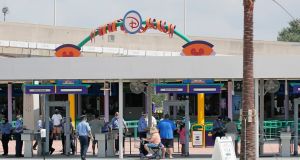 US coronavirus cases rose 2.3 per cent on Saturday with a record 71,389 new infections, exceeding the 1.9 per cent average daily increase of the previous seven days. It was the fifth consecutive day of rising US cases.

US President Donald Trump wore a mask during a visit to Walter Reed National Medical Center, the first time he has done so in public since the start of the outbreak.

The appearance comes as governors in Texas and Louisiana have had to make face masks mandatory due to a surge in cases there.

Hospitals in Texas have come under pressure from the surge, which prompted Governor Greg Abbott to reverse himself and impose a mandatory face-mask requirement on July 2nd. The federal government is ramping up coronavirus testing in Texas, Florida and Louisiana.

Cases in Louisiana rose 2.9 per cent on Saturday, to a total of 76,803, according to data from Johns Hopkins University.

New York reported 730 new virus cases Saturday, in line with the seven-day average increase of 0.2 per cent. Once the centre of the outbreak in the US, New York’s infection rate remains significantly below that of most states, even amid a cautious reopening. The state reported six new deaths compared with eight reported the day before.

The country’s coronavirus crisis response centre said 130 people had died from Covid-19 in the past 24 hours, bringing the death toll to 11,335.

Russia said 501,061 people have recovered from the virus.

Italy, which has the EU’s deadliest Covid-19 outbreak, reported 188 new cases Saturday, down from 276 the previous day and in line with the seven-day average, Health Ministry data showed.

Croatia reported 140 infections on Saturday, the highest daily toll. The number of total infections to date grew to 3,672 and 118 deaths, with one patient dying in the last 24 hours.

Slovenia confirmed 34 cases on Friday, the most since mid-April, bringing the total number of infected to 1,793. Bosnia and Herzegovina had more than 300 new cases for the second day in a row. The total confirmed cases stand at 6,719, with 219 deaths.

Cases in Serbia rose to 18,073. Police in Belgrade detained more than 70 protesters who tried to storm the parliament building late Friday as anti-government demonstrations triggered earlier this week over a planned virus curfew lapsed into violence again.

Germany’s coronavirus cases rose by 331 while the death rate held steady, according to data from Johns Hopkins University. Deaths increased by 6 to 9,063, a smaller increase than most days since the beginning of March.

The reproduction factor - or R value - rose slightly to 0.80, according to the latest estimate by the Robert Koch Institute, Germany’s health body. That’s under the key threshold of 1.0, seen as crucial to preventing a second wave of infections.