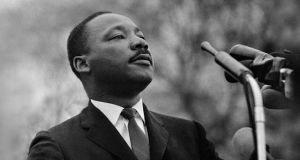 Robert Kennedy spent the afternoon of April 4th, 1968, travelling to Indianapolis for a rally in support of his bid to win the Democratic Party nomination for the presidency of the United States. At about 8pm, in the car from the airport, he heard the news that Martin Luther King had been murdered in Memphis. Rumours had already started to spread that gunmen had staked out the site of Kennedy’s own rally, but he went ahead with it. He spoke from notes scrawled literally on the back of an envelope, beginning with the blunt news: “Martin Luther King was shot and killed tonight.” He spoke specifically to the black members of his audience, acknowledging their right to be “filled with bitterness, with hatred and a desire for revenge”.

And he did what he had never done in public in the five years since his own brother was assassinated in Dallas. He evoked the pain and rage of that personal loss: “I can only say that I feel in my own heart the same kind of feeling. I had a member of my family killed, but he was killed by a white man.” Kennedy did this because he knew there was no other way than through this intimate expression of grief for a privileged white man to suggest that he understood what black Americans were feeling. And that if he did not do this he could not evoke King’s own teaching that bitterness, hatred and revenge must somehow be held at bay by the desire “to replace that violence, that strain of bloodshed that has spread across our land, with an effort to understand, with compassion and love”.

After he spoke, Kennedy drove to his hotel, lay face down on the bed and wept. Then he got up and did what he knew King would have done. He got organised. He arranged for the immediate installation of extra phone lines for the King family home in Atlanta and a private aircraft to take King’s widow Coretta from there to Memphis to collect his body. “My family,” he told the Kings, “has experience in dealing with this kind of thing.”

Kennedy’s plea for a peaceful response was not very successful. The militant Black Power leader Stokely Carmichael announced: “When white America killed Dr King last night, she declared war on us.” He told black people: “The only way to survive is to get some guns.” Riots broke out in 110 cities across the US. Fifty-seven thousand National Guard troops were deployed – the largest domestic military mobilisation in the US since the Civil War. In Washington DC alone, 1,200 buildings were burned down, some of them just blocks from the White House.

Rage was already in the air before the assassination. King had returned to Memphis the day before his murder not just to support a strike by the city’s sanitation workers but to try to ensure that a march they had planned would be well organised and peaceful. He had been in the city on March 28th when a badly planned march had descended into violence. More than a hundred people had been arrested and a black teenager, Larry Payne, had been shot dead by the police. His return to lead the second march was typical of his life’s work. He took responsibility for the most difficult thing that abused and insulted people can do: to rise up fiercely and unflinchingly, yet to resist not just their oppressors but also the great allure of revenge.

Martin Luther King redefined liberation as the state of being free, not just from the physical and legal power of your rulers but from the terrible and disabling hatreds they infuse into your soul. On the morning after his death, King’s hometown newspaper, the Atlanta Constitution, ran an editorial on the front page, written by its (white) editor Ralph McGill. It was headed “A Free Man Killed by White Slaves”. “White slaves killed Dr Martin Luther King in Memphis. At the moment the triggerman fired, Martin Luther King was the free man. The white killer (or killers) was a slave to fear.” The epitaph engraved on King’s headstone – “Free at last, free at last, thank God Almighty I’m free at last” – is not entirely right. He had long been one of the least enslaved of men.

King was just 39 when he was murdered. He had lived with contempt: the governor of his own home state of Georgia, Lester Maddox, called him “Martin Luther Coon”. Contempt surrounded even his death – the 1968 Oscars ceremony was delayed by two days because of his funeral and the host Bob Hope airily joked: “About the delay of two days, it didn’t affect me, but it’s been tough on the nominees.” King had been beaten and spat on. He had been imprisoned. He had been relentlessly spied on by the FBI, whose all-powerful director J Edgar Hoover sustained a visceral loathing of King. He had lived with death for a long time: even the aircraft that took him on his final journey to Memphis on April 3rd was delayed by a bomb threat.

At the funeral service in his own Ebenezer Baptist Church, a recording of his own voice was played. (Mourners present remembered the startled and confused look of his little daughter Bernice as she tried to see where her Daddy’s voice was coming from.) In it he talked of his own funeral: “I’d like somebody to mention that day that that Martin Luther King jnr tried to give his life serving others. I’d like for somebody to say that day that Martin Luther King jnr tried to love somebody.”

The world King lived in had no right to be loved. The US was founded on the institution of chattel slavery, one of the most thorough systems of degradation and exploitation ever created. Its consequences long survived the legal abolition of slavery. They persist to this day. In King’s lifetime, they were still fully encoded in segregation, Jim Crow laws and the denial of even the most basic of rights, including the right to vote. They were, moreover, enforced by naked violence inflicted both by private racist groups such as the Ku Klux Klan who acted with impunity and by local and state police forces. In these conditions, violence was not an unreasonable response. But King believed that it would be a morally degrading one and that it would ultimately degrade the wider society in which black people had to live.

Instead, King adopted a breathtaking strategy of subversion by imaginative transformation. He took the two most sacred texts of official American culture – the Bible and the constitution – and turned them against the powers that had controlled their meanings. This greatest of radicals occupied the most conservative rhetorical ground. He used the language of the Old Testament and the Founding Fathers but in his mesmeric, lilting incantatory voice, the written texts became vibrant speech and the speech became a song of justice and the song became a cry of freedom – freedom from shame and rage and fear.

But at the core of King’s achievement was an artist’s ability to take dead languages and bring them to electrifying life. He didn’t just lead the oppressed – he animated them. One witness hearing him speak in Memphis in 1959 remembered the effect of his rhythmic incantations on the bodies of his listeners: “Like a brain relating to the limbs.” But he also forced white society to hear its own sacred texts in an entirely different cadence, as if they were returning as echoes from the far-off reality of an oppression it had both condoned and ignored.

In his final speech in Memphis, for example, he brilliantly replaces the word “constitution” with “somewhere”: “But somewhere I read of the freedom of assembly . . . Somewhere I read that the greatness of America is the right to protest for right.” In King’s rhetoric, the founding declaration “All men are created equal” shed its platitudinous skin and stood forth as a naked and brazen challenge to the existing American order.

In a highly religious culture, King the preacher and prophet offered a double redemption. To America, he proffered the chance to redeem itself from its original sin of slavery – a vision not of the punishment it probably deserved but of the cleansing it must bring itself to desire. To the descendants of slavery – but also to all people everywhere who have lived with the great insult of inequality – he held out the hope of an even deeper deliverance. He expressed in his words and embodied in his courage the possibility of escaping the tyranny of justified rage. In that, he remains one of history’s great liberators.