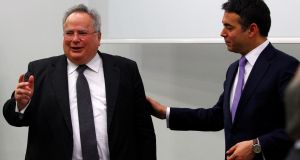 Greece has reported more progress in talks with Macedonia towards ending their 27-year dispute over the ex-Yugoslav republic’s name, which must be resolved if it is eventually to join the European Union and Nato.

Athens says the country’s use of “Macedonia” implies a territorial claim on a northern Greek region of the same name, but several alternative monikers are now believed to be on the table as hopes rise for a long-awaited solution.

Since a coalition of Social Democrats and ethnic Albanians replaced a nationalist government in Macedonia last year relations with Greece have improved dramatically, but the issue still stirs passions and triggers protests in both countries.

Greek foreign minister Nikos Kotzias arrived in the Macedonian capital Skopje on Thursday evening, on the first flight from Athens to land there in 12 years.

It was prompted by the Macedonian government’s decision to remove Alexander the Great’s name from the airport, to soothe Greek anger over Skopje’s perceived attempts to claim the legacy of the famed leader of ancient Macedon.

“I believe that if we can take the steps, and today we have taken steps, we will solve the problems before us,” Mr Kotzias said on Friday, following talks with his Macedonian counterpart, Nikola Dimitrov.

“We have agreed in great degree what we want for the future,” Mr Kotzias added. “We believe in honest agreements that will benefit both sides and where there will be no winning and losing side but a compromise. Greece desires a compromise.”

Possible compromises are believed to include the addition of “Upper”, “Northern” or “New” to Macedonia’s name, or a reference to Skopje or to Vardar, the country’s main river.

Mr Kotzias said that whatever the two states agreed upon would be “put into one text that will be submitted to the Security Council and the General Assembly of the UN” by the organisation’s veteran mediator Matthew Nimetz.

Mr Dimitrov and Mr Kotzias are due to meet Mr Nimetz in Vienna for another round of talks next Friday.

“This in practice is the second real meeting when we talked about all the crucial elements. We are talking about a very delicate balance . . . If a small step is done in one direction, the entire equation is being shifted,” Mr Dimitrov said.

Big street protests have been held in Greece and Macedonia to demand that no compromise be made in the talks, with nationalist and church groups to the fore.

In a sign of Russia’s apparent concern that resolution of the name dispute could boost Macedonia’s Nato membership bid, its foreign ministry warned Skopje’s ambassador to Moscow this week that his country’s accession to the military alliance would have “negative consequences for regional security and bilateral relations”.