Mar-a-Lago: Trump’s winter White House where he calms down 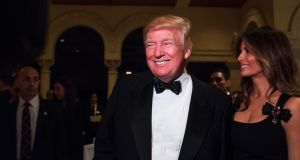 President-elect Donald Trump and his wife, Melania, at the New Year’s Eve party at the Mar-a-Lago resort in Palm Beach, Florida. The 118-room private club will be a winter White House for him to escape to. Photograph: Hilary Swift/The New York Times 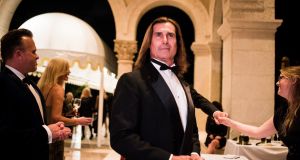 When US president-elect Donald Trump rang in the new year this weekend, he did it in Gatsby-like opulence, joined by actor Sylvester Stallone, the gossip page fixture Fabio and a crowd of wealthy developers revelling under the swaying palm trees at Trump’s Mar-a-Lago resort in Palm Beach, Florida

President George W Bush had his ranch in Crawford, Texas. His father had a compound in Kennebunkport, Maine. President Barack Obama has taken frequent vacations in Hawaii, staying at a private home.

But Mr Trump’s 118-room private club in Florida, where he has spent the past two weeks away from his home in New York City, is likely to eclipse them all as the 45th president’s winter White House. And that was always the intention of Marjorie Meriweather Post, the cereal heiress and the property’s original owner, who left Mar-a-Lago to the federal government when she died in 1973, hoping it would serve as a home for presidents.

But the government had no interest in her plan, and Trump later bought the property for less than $10 million (€9.54m) , turning it into a club where membership costs six figures.

Trump’s arrival was greeted with sneers by the Palm Beach elite, and he opened up Mar-a-Lago’s membership to Jews and African-Americans, who had been excluded from other members-only establishments. He was also the first club owner on the island to admit an openly gay couple.

Since Trump’s victory in November, Mar-a-Lago has been stuffed with guests attracted by an amenity unique to this club: the chance to rub shoulders with the next president. “It’s like going to Disneyland and knowing Mickey Mouse will be there all day long,” said Jeff Greene, a developer and unsuccessful Democratic candidate for the Senate from Florida in 2010, who is a Mar-a-Lago member and was a Hillary Clinton supporter.

Instead of hosting major corporate executives and potential cabinet secretaries for interviews inside a boxy transition office at Trump Tower in New York, Trump has been seated on an ornately designed couch, upholstered in pale fabric laced with gold, beneath a chandelier hanging from the ceiling, a scene resembling a mansion in Sunset Boulevard or Citizen Kane, two of Trump’s favourite movies.

At night, the couches are moved out and tables added to accommodate the evening cocktail crowd, among whom Mr Trump moves from one table to the next, the most powerful greeter in the world.

At the annual New Year’s Eve party on Saturday night, a gold-laced white menu included “Mr Trump’s wedge salad,” a wild mushroom and Swiss chard ravioli, and a “breakfast buffet”. Those in attendance drifted in under a yellow-and-white striped awning, the men dressed in tuxedos, the women in ballgowns, many with their hair swept high.

Guests stepped onto a red carpet as they entered the club, and wandered over to a poolside cocktail party. One guest said Mr Trump addressed people, thanking his family and the club members for their support over the years.

Howie Carr, a conservative radio host who was supportive of Mr Trump, roamed the crowd and posted on Twitter that his daughter asked Mr Trump if she could be an intern in the White House. Mr Trump’s two adult sons, Eric and Donald Jr, posed for photographs. Joe Scarborough and Mika Brzezinski from MSNBC’s Morning Joe were also there.

Like most aspects of Mr Trump’s business interests, the party generated controversy as tickets to it were made available to club members and guests for a little more than $500.

Mr Trump returned to New York on Sunday night. But the club will remain an escape for him.

His contentious Twitter posts belie his relative calm when he is at Mar-a-Lago compared with when he is isolated inside Trump Tower. Mr Trump’s combative public persona, often on display during his campaign, mostly dissolves behind the carved-stone walls of his castle.

“Mar-a-Lago is an environment he can control,” said historian Douglas Brinkley, who last week attended a Mar-a-Lago lunch with a longtime club member, Chris Ruddy, chief executive of Newsmax Media. “I watched him hold court . He was so comfortable in his own skin, and so relaxed.”

Ruddy has hosted Carr and Laura Ingraham, another conservative radio host who supported Trump, at the club and has introduced Mr Trump to a range of media figures, politicians and donors. He described the president-elect as “seeking the pre-election Donald Trump: totally at ease, very positive, very gregarious.”

Mr Trump appears to feed off contact with people at the club. Over the Thanksgiving holiday, he queried dinner guests about whether he should appoint Rudy Giuliani or Mitt Romney as his secretary of state (he ended up picking neither).

During this trip, he has heaped praise on his ultimate choice for the job, Rex Tillerson, the head of Exxon Mobil. (Trump has called him “Mr Exxon”.) He talks about the work he has done to find a solution for the problems at the Department of Veterans Affairs, which included a recent meeting with a number of executives at Mar-a-Lago.

Mr Trump told a New York Times reporter that he intended to make Brian Burns, the businessman son of a confidante of Joseph P Kennedy, the ambassador to Ireland.

With Mr Trump’s coming new job, the club has had some changes. Guests now go through an elaborate security screen to gain access to the main entrance. Secret Service agents are now sprinkled throughout the property, at night blending into the shrubbery along the grounds.

Robin Bernstein, a club member for nearly 25 years, said that some club members might express frustration, but that most thought it was important “that we keep Donald and his family safe”. Attendees seem to see a benefit so far in having the president-elect around, and expect it will continue.

“The loser in this game is Camp David,” said Mr Brinkley, referring to the longtime presidential retreat in Maryland. “Once you’re at Mar-a-Lago, and it’s so opulent and resort-friendly, the idea of suddenly inserting yourself into Camp David’s Maryland mountains environment seems unlikely.”