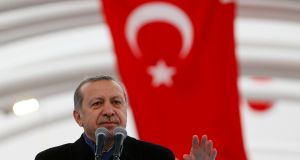 Since June 2015, Turkey has suffered 19 major terrorist attacks which have killed more than 400 people. Six were carried out by Islamic State, nine by the radical Kurdistan Freedom Falcons, and the perpetrators of four remain, so far, unidentified.

The New Year’s Eve shooting spree at an Istanbul nightclub bears the hallmarks of Islamic State, also known as Isis, which targets civilians, while the Falcons have focused on police and troops.

Both Islamic State and the Falcons have been wreaking “revenge” on Turkey for policies adopted by President Recep Tayyip Erdogan, policies with deadly unintended consequences.

The first policy was adopted during the summer of 2011, four months after unrest erupted in Syria, when Erdogan formed the “Free Syrian Army” with the aim of toppling by force the government of Syrian president Bashar al-Assad and created the expatriate Syrian National Council to assume power once he was ousted.

The Free Army never became a coherent force but rather a convenient brand name for scores of small armed factions with conflicting agendas. The council was internally divided and without support in Syria.

Nevertheless, fighters, funds and arms were funnelled through Turkey to these groups and to al-Qaeda offshoots Jabhat al-Nusra (rebranded as Jabhat Fatah al-Sham) and Islamic State, enabling the two jihadi organisations to become the most powerful armed groups in Syria.

Meanwhile, Islamic State overtly established cells and centres in poor quarters of Turkish cities, towns and villages and enlisted fighters for Syria and Iraq. This was tolerated by the government until 2014 when Turkey’s ally, the United States, belatedly forged a coalition to wage air strikes against Islamic State in Mosul and other cities the group had occupied in Iraq.

In July 2015, the US secured Ankara’s agreement to use the Nato airbase at Incirlik for this purpose, although Erdogan had been angered over Washington’s support for the Syrian Kurdish People’s Protection Units during the battle against Islamic State for the Syrian border town of Kobane in early 2015.

Although Turkey had been engaged in peace talks with the Kurdish Workers’ Party, since March 2013, Erdogan took a second damaging decision during 2014 to resume bombing its mountain redoubts in Iraq while claiming to be fighting Islamic State.

In July 2015, the Kurds cancelled the ceasefire and staged attacks against Turkish troops and police in the Kurdish majority southeast.

Erdogan responded by mounting a major offensive against the Kurds. While his military objective was to crush the movement, a goal Turkey has failed to do for 30 years, his political aim was to stir Turkish nationalism to win support for his Justice and Development Party, which had failed to secure a majority of seats in the assembly in the June 2015 poll. The result was a hung parliament.

He called a snap election for November in the expectation that resuming military action against the Kurds would prompt Turks to vote for his party instead of the pro-Kurdish Peoples’ Democratic Party which in June had won seats formerly held by his party. He was determined this would not happen again. His majority was restored.

Some analysts have suggested Erdogan’s decisions to back insurgents in Syria and resume the conflict with the Kurds may have prompted senior military officers who did not want to become embroiled in open-ended wars to carry out the failed July 15th coup.