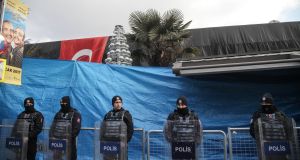 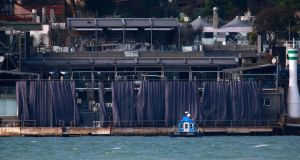 The Reina nightclub by the Bosphorus strait: at least 39 people were killed during the terrorist attack. Photograph: Getty Images

Just 75 minutes into 2017, Istanbul’s well-known club and restaurant Reina joined the growing list of sites in Turkey that terrorists have attacked in recent weeks and months.

Sitting on the shores of the Bosphorus strait in the upmarket Ortakoy district and boasting spectacular views of the suspension bridge which putschist troops briefly occupied last July during the failed military coup, Reina’s wooden facade is now hidden behind a giant, blue tarpaulin.

Half a dozen armed police officers stand guard when a man and woman arrive at the main door, embrace and walk inside to what must be a scene of unbridled horror. There are no mourners, and the carnations and candles that have come to symbolise Turkey’s ongoing struggle with terrorism are pitifully few in number.

The television camera people lined up across the street from the club far outnumber the police or the bereaved. Every few minutes, staff and cleaning women bring out items of clothing: coats meant to keep partygoers warm against the cold of Istanbul’s New Year’s Eve night; jeans and trousers; shoes in ones or pairs. All are dumped into the back seat of a white Renault Megane 50 metres to the left of the main door.

“They say 35 to 40 died but it’s probably more because when I was walking, people were walking on top of people,” footballer Sefa Boydas was quoted by the Hurriyet Daily News newspaper as saying of the scene inside the club.

Yet, driving through the city and to within 200m of the nightclub just an hour after the attack early on Sunday morning and with the suspect running free, security across Istanbul was worryingly blase. There were no checkpoints stopping cars on a number of major streets and highways along a 30km drive from Ataturk airport in the southwest to the district of Kadikoy in Anatolian Istanbul.

Later, on Sunday evening and less than 24 hours after the gunman took at least 39 lives, including those of 24 foreigners, there was nothing to stop joggers and pedestrians passing within feet of the club.

Some passersby recorded video of the scene on their phones, others glanced quickly before walking on. Every time the tarpaulin was drawn upwards, glimpses of the bar stools and low-lights inside could be seen.

The club, perhaps the best known in Istanbul, was also famous for its expensive cocktails and restaurant menu, as well as its strict entry policy. Names such as the Galatasaray soccer club’s German striker Lukas Podolski or U2 frontman Bono could be guaranteed the best service.

Posters and banners depicting Santa Claus being punched by a skullcap-wearing man and slogans denouncing Christmas and New Year’s Eve celebrations – the latter a major event in Turkey when gifts are exchanged by secular or western-minded Turks – are evident in traditional parts of Istanbul and elsewhere across Turkey.

Some blame – and many acclaim – Turkey’s president Recep Tayyip Erdogan for giving a political identity to the millions of conservative Turks who make up a large swathe of society. He has regularly used religious rhetoric in his speeches and is seen as the vanguard of Islam in Turkey.

With Turkey already divided along Kurdish and Turkish lines by a war centred on a political struggle that has taken thousands of civilian, security and separatist lives since July 2015, the division of the country’s liberal and conservative elements is one it can ill afford to fuel.

Turkey was founded as a secular, western-looking state from the ashes of the Ottoman empire almost a century ago, an identity that has been forged into the nation’s collective consciousness for generations, despite attempts by contemporary leaders to change that.

Whether or not the carnage at the Reina nightclub may be the latest example of such divisions remains to be seen; what does not remain to be seen is that Turkey is undergoing changes no one seems capable of reeling in.