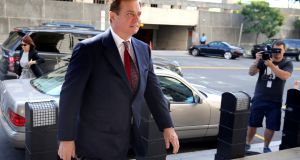 Defence lawyers for Paul Manafort rested their case on Tuesday without calling any witnesses or having the former Trump campaign chairman testify in the trial where he is accused of bank and tax fraud.

At the same time, the judge overseeing the trial rejected Mr Manafort’s motion to throw out the 18 charges against him.

Mr Manafort, who has watched silently as the case against him was argued in federal court, was asked by Judge TS Ellis whether he wanted to testify in his own defence. “No, sir,” he replied.

Asked whether he was satisfied with the advice he had received from his lawyers, Mr Manafort said, “I am, your honour.”

Judge Ellis indicated that prosecutors and Mr Manafort’s lawyers would likely make closing arguments to the 12-person jury on Wednesday. After that, the jury will begin its deliberations.

Mr Manafort’s trial is the first courtroom test for special counsel Robert Mueller, who indicted him in October 2017 as part of an investigation into Russian meddling in the 2016 US election.

Mr Manafort is being tried on 18 counts, which include tax and bank fraud charges, as well the failure to disclose foreign bank accounts. If found guilty on all charges, he could face eight to 10 years in prison, according to sentencing expert Justin Paperny.

US prosecutors on Monday rested their case against Mr Manafort after 10 days of testimony alleging he evaded taxes and defrauded banks.

Mr Manafort served as Donald Trump‘s campaign manager for several months in 2016, during the time the Republican accepted his party’s nomination to run for president.

As its final witness on Monday, the prosecution recalled a Treasury Department agent who testified that Mr Manafort’s consulting companies did not disclose their foreign bank accounts, as is required by law, in addition to him failing to do so personally.

The prosecution also called James Brennan to the stand on Monday. Mr Brennan is an executive at Federal Savings Bank, which extended $16 million in loans to Mr Manafort on his Hamptons estate and a Brooklyn brownstone house in late 2016 and early 2017.

On Friday, another Federal employee testified that Mr Calk personally approved loans to Mr Manafort while seeking Mr Manafort’s help getting a job in President Donald Trump’s campaign and his cabinet.

During the trial, more than two dozen witnesses took the stand and portrayed Mr Manafort (69) as a lavish spender with little regard for the law. As a political consultant for pro-Kremlin politicians in the Ukraine, Mr Manafort earned some $60 million between 2010 and 2014.

Stashing the money in 31 offshore bank accounts, he skirted taxes by wiring it directly to vendors to snap up real estate and luxury goods, the witnesses said.

The trappings of Mr Manafort’s lifestyle dominated media headlines throughout the trial: there was half a million dollars worth of antique rugs, $750,000 spent on landscaping for his $13 million Bridgehampton mansion, and more than $1 million for clothing, including a $15,000 jacket made of ostrich skin.