The planned 'Unite the Right 2' rally in Washington DC on Sunday turned out to involve fewer than 30 white nationalists and hundreds of counter-protesters. 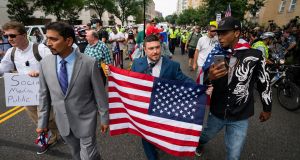 Jason Kessler (C) marches to the White House on the anniversary of last year’s ‘Unite the Right’ rally, in Washington, DC, US. Photograph: Jim Lo Scalzo/EPA 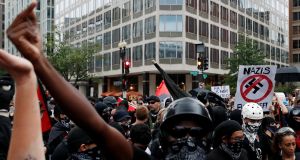 The “Unite the Right 2” rally, organised to coincide with the anniversary of last year’s violence at a white supremacist march in Charlottesville, Virginia, is taking place in Lafayette Square, across from the White House.

About 20 demonstrators headed to the white nationalist rally walked through the heart of Washington, DC, on Sunday, cordoned by rows of police officers and outnumbered by hundreds of counter-protesters who taunted them.

At the head of the white nationalist group was Virginia activist Jason Kessler, who helped organise last year’s event in Charlottesville. He emerged from a Washington subway station holding an American flag, accompanied by a handful of fellow demonstrators, before walking towards the White House.

Counter-protesters who held signs declaring “No Hate” awaited their arrival, and chanted “Nazis go home” and “Shut it down” at them.

There was an enormous police presence to keep both sides apart and avoid the street brawls that broke out last year in downtown Charlottesville. A local woman, Heather Heyer, was killed at that event when an Ohio man, James Fields, drove his car into a crowd of counter-protesters.

At the time, president Donald Trump said there were “very fine people” on both sides, spurring criticism from across the political divide that he was equating the counter-protesters with the rally attendees, who included neo-Nazis and other white supremacists.

In Washington on Sunday, counter-protesters organised an afternoon programme of music, speeches and poetry readings at Freedom Plaza, east of the White House.

Sean Kratouil, a 17-year-old who lives in Maryland, was wearing a vest with “Antifa” on the back and said he was there to help start a movement of peaceful anti-fascists. He said he was concerned that when rallies turn violent, it makes his side look bad. “Public perception is key,” he said.

Kessler said the rally was aimed at advocating for “free speech for everybody”, and he blamed last year’s violence in Charlottesville on other groups and the media.

“I’m not a white supremacist. I’m not a neo-Nazi,” Kessler said as a train his group boarded in suburban Virginia rolled towards Washington.

In the picturesque college town of Charlottesville, hundreds of police officers had maintained a security perimeter around the normally bustling downtown district throughout the day on Saturday.

Vehicular traffic was barred from an area of more than 15 city blocks, while pedestrians were allowed access at two checkpoints, where officers examined bags for weapons.

Hundreds of students and activists took to its streets on Saturday evening. Many of the protesters directed their anger at the heavy police presence, with chants like “cops and Klan go hand in hand”. Police in Charlottesville were harshly criticised for their failure to prevent the violence last year.

Earlier on Saturday, a group of anti-fascist protesters walked through the downtown area, holding signs with messages like “Good Night White Pride”. But the day was largely free of confrontation.

Several events were scheduled in the city on Sunday, including a gathering that will include veteran civil rights activist Reverend Al Sharpton and Susan Bro, the mother of the woman who was killed a year ago. – Reuters