Greece remains vassal state, a slave to EU and its own flaws 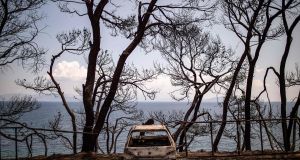 Burnt car by the coast of Mati, near Athens: on many counts, Syriza has failed. Photograph: Angelos Tzortzinis/AFP/Getty

By the time you read this, the death toll in the catastrophic fires in Greece will have been counted, the political blame-game will have been exhausted, and the relief agencies will be working to restore some level of normality to people’s lives.

Whether the fire was started by the self-ignition of tinder-dry wood and grass, or – as is now thought most likely – by an irresponsible householder thoughtlessly lighting a domestic bonfire (in itself an illegal action), doesn’t help the almost 100 dead or the homeless.

But the policy issues about the exercise of managerial judgment, the provision of fire-fighting and ancillary resources and the control of unlicensed building will continue. These issues are symptomatic of the political and administrative chaos of Greece today, and run counter to the innate beauty and intelligence of the Greek people.

If Alexis de Tocqueville (1805-1859) could see Greece today, he wouldn’t have said “in a democracy people get the government they deserve”. Greeks deserve a government, and at present they have neither an effective government nor a viable opposition. A cynic could point to the chaos of Greek history and suggest that Greeks really deserve this kind of political vacuum. But unless Greece wants to regress to its pre-independence condition of a vassal state, it must perform at least some of the functions of a modern democracy anxious to take its place in the international marketplace of goods and ideas.

Greeks are rapidly learning that it is not enough to have been, in ancient times, the home of democracy, philosophy, classical art and drama

As General Custer is alleged to have said to Sitting Bull (shortly before the Amerindian wiped him out): “You are paying the price for being an outdated people.” However brutal the treatment of the Amerindians, the sentiment is correct: “backward” people will be overcome by the power of capital and technology against which traditional weapons – including logic – are defenceless.

The tension between staying as you are, with residual values and behaviours, and motoring on towards a new kind of society, remains at the heart of the Greek debate.

Meanwhile “civil war” politics – the leftist radicals against the conservative bourgeoisie – continues along a parallel line of debate. With Syriza travelling towards power with no previous convictions other than the conviction that they were right, Greek voters did feel that they had at last got the government they deserved: free of dynastic interests, aligned to none of the failed policies. A government that would stand up to bullies in the EU and International Monetary Fund, simplify bureaucracy, eliminate corruption, reform the education and health systems, tell the truth and cherish all the citizens equally.

On all these counts, Syriza has failed. The failure of a far-left government either to govern decisively or to engage with the international forum has convinced many that there is little or no place in the parliamentary centre for radical politics.

Greeks are rapidly learning that it is not enough to have been, in ancient times, the home of democracy, philosophy, classical art and drama, or to possess some of the most beautiful scenery in the world. In almost 200 years of independence, Greece has never had a government capable of safeguarding the natural heritage of either the landscape or the mindscape.

There are, in fact, three types of “Greece”. First, the ancient Hellenism which extended throughout the known world but which was constituted by a melange of competing city-states and was never a cohesive state in the modern sense. Second, the “Greekness” which survived beneath the Ottoman boot, when Greeks learned the mendacity and evasiveness which today characterise all areas of public life along with their sense of honour and integrity.

Third, the modern Greek state which is obeying the imperative to move away from “Greekness” towards internationalism but which is organically and systemically dysfunctional. Worse than the lack of industrial infrastructure is the almost complete absence of encouragement for innovation, creativity or entrepreneurial skills and especially the barriers for Greece’s brilliant young graduates.

The emigration figures are eloquent: from 2008 to 2015 almost 500,000 were in “human capital flight”, most of them young, skilled graduates. Among students today, there’s a growing realisation that this is the only path to career survival.

The tragedy of the fires has dented the momentum of the “feelgood” atmosphere that prime minister Alexis Tsipras is trying to create in the lead-up to elections, but there is little faith in his likely gestures towards tax reform or job creation. The pity is that, in government, opposition New Democracy would be no better.

From the 15th to the 19th centuries, most ethnic Greeks were vassals to the Turks. Despite Turkey’s current expansionist policies, this is not an option today. But Greece without doubt remains a vassal state, subject not only to the EU and the international marketplace but also to its own internal sclerosis.

1 Gardaí found naked man on a cross being whipped in Dublin club, court told
2 Two in custody after Ryanair flight to Dublin forced to divert
3 Coronavirus: Number of cases rise by 32 but no new deaths reported in the State
4 Taoiseach says Garda document on Cowen case ‘not quite as portrayed’
5 Man (47) charged over damage to Luke Kelly statue in Dublin
Real news has value SUBSCRIBE