Macron and Le Pen shift strategies ahead of TV debate 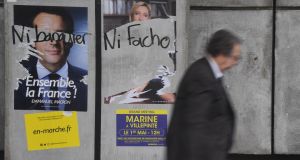 Emmanuel Macron and Marine Le Pen, the two candidates in Sunday’s French presidential election, have changed strategies in the last week of the campaign, as both prepare for a crucial television debate on Wednesday night.

Following his victory in the first round, Macron, a centrist, had challenged Le Pen, the leader of the extreme right-wing Front National, in her claim to represent the poor and middle classes.

Since last Friday, when he visited the village of Oradour-sur-Glane, where Nazis murdered inhabitants, Macron has concentrated on “re-demonising” the Front National through repeated symbolic trips.

On Sunday and Monday, Macron attended a commemoration of the deportation of French Jews and a homage to Brahim Bouarram, a Moroccan who was drowned by skinheads following a Front National rally 22 years ago.

On Tuesday Macron met with Daniel Cordier, one of 11 surviving compagnons de la Libération, or heroes of the second World War Resistance. Cordier (96), had never before taken a political stand, but he said it was “monstrous” that Le Pen has a possibility of becoming president. “Le Pen, in French political life, represents the negation of everything we fought for,” he added.

In Wednesday’s debate, Macron is also certain to attack Le Pen’s flip-flop on pulling France out of the euro zone and Europe, which was the mainstay of her economic policy.

Since she struck a deal with the renegade Gaullist Nicolas Dupont-Aignan last Friday, Le Pen and other Front National officials have sent contradictory signals regarding the single currency. Florian Philippot, a vice-president of the Front National and Le Pen’s right-hand man, said it was possible “to do a lot of things without leaving the euro.” But Le Pen told Le Parisien newspaper that “the euro is dead”.

In an attempt to appeal to the far-left voters of France Unbowed, whose candidate Jean-Luc Mélenchon won 19.6 per cent in the first round, Le Pen repeatedly attacked Macron as a tool of “international finance”.

The attempt seems to have failed. France Unbowed announced the results of an internet survey on Tuesday showing that 36 per cent of supporters will vote blank or null, while 35 per cent will vote for Macron and 29 per cent will abstain.

An Ifop opinion poll published Tuesday credits Macron with 60 per cent of the vote next Sunday, and Le Pen with 40 per cent.

In a separate setback for Le Pen on Tuesday, it emerged that she had plagiarised four passages totalling 90 seconds from a speech made in mid-April by the defeated conservative candidate François Fillon. The Twitter account @ridiculetv posted a montage of their near identical words.

The speech was written by Paul-Marie Coûteaux, a right-wing sovereignist who worked for Le Pen in 2012 and for Fillon this year. One plagiarised section praises the geography of France, another the French language and a third the influence of French thinking, which both portrayed as an alternative to totalitarianism. Fillon mentioned Nazi and Stalinist totalitarianism, while Le Pen called “globalism” and “Islamist ideology” totalitarian.

Macron continues to receive numerous endorsements. The former Greek finance minister Yanis Varoufakis and the German foreign minister Sigmar Gabriel both urged the French to vote for him and against Le Pen in Le Monde newspaper.

During the Greek crisis in the summer of 2015, Macron was “the only minister in Europe who did everything possible to help us. He took a personal political risk to do so,” Varoufakis wrote.