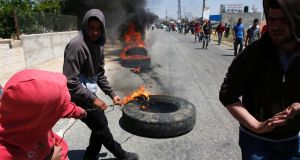 The two-state solution is in peril. With the Israeli right in the ascendant, the peace process frozen and the presence in the White House of a president who appears disinclined to exert real pressure on the Israeli leadership, illegal settlement construction continues apace in the occupied West Bank and senior figures in prime minister Binyamin Netanyahu’s government openly repudiate the two-state principle.

Donald Trump, who has dispatched a settlement advocate to be US ambassador to Israel, signalled a willingness to jettison a long-standing bipartisan pillar of US Middle East policy when he remarked recently: “I’m looking at two states and one state. I can live with either one.”

Meanwhile, many Palestinians, disillusioned with life under occupation and the state of a peace process that exists in name only, are themselves losing faith in the idea of two states, Israeli and Palestinian, co-existing side by side. Young Palestinians increasingly argue for a single state, seeing the conflict not as a stand-off over the 1967 borders but over the entire stretch of land between the Mediterranean and the Jordan River.

The problem is that much of the international community sees a single state as a non-runner. Since the two-state principle was laid down in the Oslo accords in the mid-1990s, it has been widely seen as the only realistic way to preserve Israel’s democratic and Jewish character while vindicating the Palestinians’ right to self-determination. Anything else would be “a recipe for a never-ending war between the two peoples”, as a paper from Carnegie Europe put it last month. For the EU, key Arab states and the Washington establishment, it follows that taking the two-state solution off the agenda means abandoning any hope of a meaningful settlement.

All of this goes some way to explaining the gathering momentum behind international moves to recognise the state of Palestine. Unilateral declarations of recognition began in the late 1980s, led by developing countries in Africa and Asia and a number of communist and non-aligned states. Many others followed over the decades; today 137 capitals have official diplomatic relations with the Palestinian state.

One of the most significant of those declarations came in 2014, when Sweden became the first EU state to make the move (a number of others, including Hungary, Poland and Slovakia, did do before joining the bloc). The decision was less an affirmation that a functioning state already existed, Stockholm argued, but a symbolic gesture aimed at resuscitating a moribund peace process while supporting the Palestinian Authority. “It is important to support those who believe in negotiations and not violence,” Swedish foreign minister Margot Wallstrom said. In doing so, however, the Swedes provoked the ire of the Israeli government, which argues that an independent Palestine should emerge only through comprehensive negotiations.

The Republic is one of a number of EU states, also including France, that says it is ready to recognise Palestine when the timing is right. The Dáil and Seanad adopted separate motions on the issue in 2014, and Fianna Fáil and Sinn Féin have been pressing the Government to act. In February, the Israeli newspaper Haaretz reported that Israel’s ambassador to Ireland, Zeev Boker, cabled a warning to the Israeli government that Dublin would soon recognise Palestine as a state. It reported that Mr Boker also proposed working to block the move by asking the US administration of president Donald Trump to put pressure on Ireland, as well as having Netanyahu call Taoiseach Enda Kenny to discuss the issue.

According to one Irish official, acting alone at this point would achieve nothing except annoy Israel

Nothing materialised, but the issue hasn’t gone away. Last week, 89 artists, academics and other public figures, including three former Irish ambassadors, signed a letter urging Kenny to act “without delay” so as to “strengthen the case for a two-state solution and help to provide parity of status between Palestine and Israel”.

The Government has accepted the principle but remains deliberately vague on timing. The Fine Gael/Independent programme for government gives ample room for manoeuvre, committing to recognition “as part of a lasting settlement of the conflict”. (It would hardly do otherwise.) Minister for Foreign Affairs Charlie Flanagan has said recognition is “under consideration”, but it’s widely known that the department is reluctant to act unless a group of like-minded EU states move together.

According to one Irish official, acting alone at this point would achieve nothing except annoy Israel. “We’re not exactly a heavy hitter. If the UK or France did it, it might be a different thing,” says the official, adding that it could even “rebound” on the Palestinians. “One of the hallmarks of Irish foreign policy going back 60 years is pragmatism. We have tried to do things in a way that we get a tangible result.”

The same official says diplomats sense the Swedes have been “shut out” by the Israelis since their unilateral move in 2014, and says Dublin wants to maintain friendly relations with both sides. “We’re very much in step with the French on this,” the official adds.

For others, inside and outside Government, this holding position reflects the department’s innate caution and downplays the symbolic importance of recognition. They argue that the move would be consistent with decades of Irish diplomacy in the Middle East. Ireland has invested heavily in the Palestinian territories, and much of that is aimed at helping to build a functioning state infrastructure. In this analysis, official recognition is the logical next step, particularly when the two-state solution is looking shaky.

“It’s a lack of courage,” says another insider of the Government’s position. “They’re fearful that they might be out on a limb, but I don’t think there will be a unified EU position.”

The Palestinians’ right to a state of their own has been recognised by Ireland for many years, the same source says. “It’s a pity that we’re not willing to come out and do the right thing when it might do a lot of good. If we did it, others might jump in behind us.”