Stories of Colombia’s war and peace: The displaced 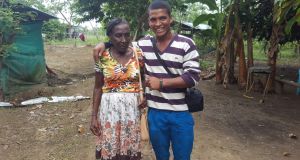 To resist and to resist

We the peasants say

José Francisco Álvarez (21) puts an arm around Ligia María Chaverra (77) and launches into a rap he wrote, No More War. Ligia María, an Afro-Colombian woman known as “the matriarch” of the community, the one the others look to for her prodigious experience and unmatched stoicism, has heard it many times and quietly joins in the parts she knows best.

I wanted to talk also about Ligia María Chaverra,

A matriarch who resists in the middle of the war.

José Francisco and Ligia María, more than half a century apart in age, bridge the years partly through their roles as community leaders in the humanitarian zones in this area near Curvaradó in Colombia’s northwestern department of Chocó.

The zones, backed by the Inter-American Court of Human Rights and supported by a local NGO called Inter-Church Justice and Peace Commission (CIJP), offer small groups of families respite from the paramilitary- and guerrilla-driven violence of this poor, troubled region. Armed actors, including the army, are not allowed in here.

We used to have armoured cars but now we don’t have them anymore. Some leaders have been killed and some have been threatened

And yet, regardless of the peace deal agreed between the Farc guerrilla group and the Colombian government last November, aimed at ending 52 years of war, life remains hazardous for social leaders. Ligia María has the trappings of a life not commonly associated with a 77-year-old woman: she owns a bullet-proof vest and is driven around in an armoured car.*

“In the last month all this protection [for other social leaders] has stepped back,” she says. “We used to have armoured cars but now we don’t have them anymore. Some leaders have been killed [in the region] and some have been threatened. We’ve asked the government to get the cars back.”

Ligia María, José Francisco and a few other local people sit to tell their stories on a bench under a canopy of trees where meetings and even schooling have taken place in this “zone” at Caracolí – a tiny, dusty village that is home to seven families. Conversation is interrupted by the shrill pitch of roosters that charge about heedlessly between the trees and the simple, neat wooden houses.

The families who have been living here for almost a decade, and those in the nearby zone of Las Camelias, where José Francisco and Ligia María live, are part of the broadest church in Colombia: displaced people driven from their homes or land.

The United Nations calculates that Colombia has more than seven million “internally displaced persons” (IDPs), out of a population of about 47 million – outside of Syria, the largest number of IDPs in the world. About half of these live in urban areas, including millions in the sprawling slums and suburbs of south Bogotá. Many others are scattered across remote territories like this one, especially regions where the land has a value that can be expressed in economic terms through mining, coca crops, palm oil and banana plantations, or cattle ranches.

The long-term, lopsided battle for resources, pitting peasants against big business supported by men with guns, has been responsible for a vast number of the massacres and targeted killings in Colombia’s half-century war. Although there are now laws in place to help displaced victims recover their lands, re-enforced by a chapter in the peace deal agreed between the Farc and the government, the process is laborious and difficult, especially in a context where the problem of armed groups – paramilitaries – has not disappeared.

Although it has greatly reduced, the problem of displacement has not gone away either: 13,864 people were newly displaced in Colombia in 2016, according to the UNHCR, the UN refugee agency, with significant displacements already so far in 2017, especially along the Pacific coast. Indigenous communities and Afro-Colombians, such as those in this area of Curvaradó, have been worst affected.

José Francisco was two years old when his family was displaced for the first of seven times. The late 1990s was a devastating time in Colombia’s conflict, especially in this region, where massacres by right-wing paramilitaries displaced entire communities. “The way they worked was that they would shoot one person in front of everybody and then they would shoot a few other people, and then throw the bodies in the river. That’s when people realised they had to leave their land,” says José Francisco.

Some people, like Ligia María, went to hide out in the mountains in the hope that trouble would pass. Others, like José Francisco’s family, travelled between nearby towns looking for help. That in itself did not bring safety: José Francisco’s father, two brothers and an uncle were, he says, “taken by the paramilitaries and then disappeared”. He was told that they were tortured before being killed.

The persecution of civilians in towns and villages came in many forms: children could not get proper schooling because teachers were frightened away whenever fighting broke out between armed groups. At other times, José Francisco says, the army pressurised children to give them information about the whereabouts of guerrillas. For those who were displaced, there was the additional burden of shame. “I felt that every time we went into a town we were discriminated against because we were displaced people,” he says. “After all that time the only thing we wanted was to get back to our land.”

A victims and land restitution law introduced in 2011 was aimed at returning millions of hectares of abandoned or stolen to its rightful owners. The difficulties of a process in which many rightful owners do not possess property titles partly explain its failures so far, however, and the lack of progress on restitution has seen the government criticised by the country’s constitutional court.

Ligia María, who has lived in the area for 60 years, can frame the national problem within her own experience. “I own a big piece of land, not in this humanitarian zone but in another one – that zone is inside my land,” she says. “But we don’t have the legal documents. Around the zone are paramilitaries – some of them wear uniform and they are putting pressure on us. That’s why the repossession of the land hasn’t been possible – because the government hasn’t kicked out these people and doesn’t guarantee our security.”

Until that situation changes the displaced people of the humanitarian zones intend to continue “The Resistance” – the name of José Francisco’s rap band. “We are going to keep fighting,” he says. “We still have hope that Colombia can have a real change. We don’t want a place that the rich are richer and the poor are poorer. I hope I can live in a country with the same conditions for everybody, where everyone can participate.”