The young woman spent a decade sleeping outdoors, and training in bomb-making and weapons 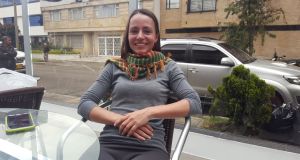 Tanja Niemeijer, a Dutch-born Farc guerrilla who was on the insurgent group’s negotiating team during peace talks in Havana, photographed in Bogotá, Colombia, earlier this year. Photograph: David McKechnie

It says something for the trajectory of Tanja Nijmeijer’s life that her role as one of Farc’s principal negotiators in Havana is one of the things for which she is least well known. Long before the peace talks, international media were enthralled by the mystery and contradictions of the pretty, educated, middle-class young woman from a small Dutch town who ran away with the Farc in 2002 and disappeared into the jungle.

Nijmeijer, now 38, hasn’t been back in the Netherlands since she went to her grandfather’s funeral that year. Does she miss it? “Sometimes I do, especially the language, my family of course, friends, the landscapes. Also the idiosyncrasies, like the character of the Dutch people, which is very different from the Colombian people. Dutch people are very direct. I’ve had a lot of problems here in this country with my straightforwardness.”

The extent of the progress that Colombia and Nijmeijer have made is illustrated by the slight irony in her choice of meeting place: the front terrace of a small budget hotel near the US embassy in Bogotá. In December 2010, Nijmeijer was indicted in a US court for her alleged role in the kidnapping of three US ministry of defence workers and Interpol issued a warrant for her arrest. But four years of successful peace talks in Havana have rehabilitated many reputations. Days after we speak, Nijmeijer and other high-profile Farc members are well-heeled guests at the opening of a peace-themed film festival in Cartagena.

The transition to a post-guerrilla life may present fewer problems for someone so accustomed to self-transformation as well as the limelight. When Nijmeijer’s diary was found during the raid of a rebel camp in 2007, it caused a sensation in Colombia and the Netherlands, above all for her seeming disillusionment with the guerrilla life and the organisation.

In one entry, she wrote: “I’m tired. Tired of Farc. Tired of people. Tired of living together.” In another she wondered whether, if the Farc managed to achieve power, would “the girlfriends of the comrades [be seen] in Ferrari Testarossas with breast implants and eating caviar?”

The scandal raised speculation that Nijmeijer was being held against her will, but in a belligerent video message in 2010 she said that any prospective government rescue party would be met “with AK47s, bazookas, mines, mortars, everything”. A book and documentary about her life emerged, including a tantalising recording of her singing and playing Don’t Cry For Me Argentina in the jungle, dedicated to her parents. Not long after, when her camp was raided by Colombian forces, it was unclear whether Nijmeijer had lived or died. “My mum said that was something terrible,” she says. “She almost had a heart attack.”

The dilemma for her family lay not only in fears for Nijmeijer’s wellbeing but their lack of sympathy for her cause. “She’s a member of an organisation that takes hostages and deals in drugs, there’s no denying that,” her aunt, Mariette Olde Dubbelink, told the New York Times in early 2010, speaking on behalf of the family.

Nonetheless, Nijmeijer maintains that their support since she joined the Farc, inspired by “the fever of the revolution” after witnessing the extent of inequality in the country during a year there as a wide-eyed 19-year-old English teacher, has been without conditions or judgment. “They really respect what I’m doing – they don’t agree with the Farc, they don’t agree with violence as a means of defending yourself, but they do respect the decisions I have made. They have always said that.”

In 2012, after a decade of eating and sleeping outdoors, of 30kg day-packs, interminable hikes and training in bomb-making and weapons, Nijmeijer was plucked from the jungle and taken by helicopter to Havana. “At the beginning you get scared by every aeroplane that comes by. The noises from the street – you are not used to it. I think the most difficult thing for me and for all of us that went to Havana was the change from a life in the jungle where life is very physical, to a life with a computer screen and people sitting at a table and listening and talking and listening and discussing, which gets very boring.”

The culture shock manifested itself on many levels. As the peace talks began, two sides that had been at war for almost 50 years had to face one another across the table. “Nobody said anything, and nobody knew what to do: to shake hands or to sit down,” she says.

Nijmeijer, whose multilingualism was of particular benefit to the Farc negotiators, also struggled with the glare of the media both on a private level and as a Farc representative. “The press five years ago wasn’t the same as the press today – today, for example, you can see that they are trying to promote peace. Four years ago it wasn’t like that. It was also very difficult to say something as a member of Farc. Like, what were we going to say about victims? We hadn’t discussed those kind of themes.”

Nijmeijer was assigned to two subcommissions, dealing with gender and the removal of minors from the Farc ranks, respectively. “Everything was very enriching,” she says. The central role of victims in the talks, and in particular the fact that there were victims not only of the Farc present, but also of the state and paramilitaries, helped bring about a shift in perceptions, she thinks.

Nijmeijer has always stoutly defended the worst aspects of the struggle, and the Farc’s role in killings, kidnappings and the drugs trade, as unpleasant consequences of an unjust war.

There is some sense that the experience of meeting victims in Havana breached her ideological defences. “The meetings with the victims were at a personal level for me the most impacting thing that I experienced in Havana ... Because it means asking for forgiveness, it means to see those people who have suffered from, let’s not say from my actions, but from the actions of your organisation. To face them, to actually see them suffering. Which is very difficult. I start thinking about it and I get emotional again.”

Nijmeijer expresses confidence in the desire of the government to see through its side of the agreement, but says slow progress in areas such as “drug policies ... reincorporation of guerrilla fighters, education, productive projects” have left the guerrillas “a little bit disappointed”, and threatened to increase the small number of dissidents who have already emerged.

She cites the unrest around forced eradication of coca crops near Tumaco on the southern Pacific coast as an illustration of the difficulties. “There might be a lack of money, there might be a lack of goodwill to implement certain things of the agreement – I don’t know.” In several areas where the Farc has left, paramilitaries have already moved in, in some cases threatening or harming social leaders. “It seems to be difficult for the state to occupy those vacuums quickly, which is very dangerous I think.”

Nijmeijer, a graduate in Roman languages and culture, says that in future she would like to help in the education of guerrillas, seeing teaching as a natural outlet for her political inclinations. She has no wish to be a political candidate, she says: “I think to be a candidate you have to be an extrovert person who likes to be in the spotlight, and I don’t.”

But her thoughts, she says, are less about her own future than about the agreement: “It’s exciting for all of us, it’s a big change in our lives and also because it’s a big change for all Colombians, for the whole country and we really hope this is going to work. We are really committed to this, to the implementation of the agreement.”

Elections next year may usher in a president who opposes the peace deal, especially if, Nijmeijer maintains, lies told in the lead-up to the referendum are repeated during campaigning. “I think for that it’s very important for people to see in the territories and also in the cities that peace is actually working, that the implementation is working, that the countryside is getting better. And if we can show people that, the election is going to be no problem.”

Part 2 in a series of 4. Tomorrow: The bomb victim.