Life in a liberal enclave in a conservative US state

Made famous in a song, Chattanooga is described by locals as 'not typical Tennessee' 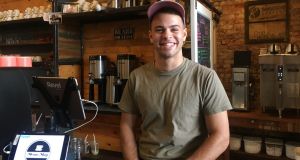 Cody the waiter in Mean Mug cafe, Chattanooga: his customers are mostly young millennials working on their laptops.

In the third part of her series “Coast to Coast: Travels in Trump’s America”, Washington Correspondent Suzanne Lynch travels to Chattanooga.

As I check into a hotel on the outskirts of Chattanooga, the friendly receptionist takes my ID and looks up. “We don’t get many people from your parts around here,” she says with a smile.

It’s not my Irish accent that has caught her attention – “We hardly ever have anyone stay from DC,” she says, as she takes a copy of my Washington driving licence.

I’ve arrived in Chattanooga, a city in southeastern Tennessee near the border with Georgia and Alabama.

Leaving the town of Dandridge further north a few hours earlier, it seemed a good place to stop for the night. In fact, it proved to be an interesting spot.

Chattanooga is the fourth-largest city in Tennessee. Made famous by the 1940s Glenn Miller hit Chattanooga Choo Choo, the town evolved as a transport hub with the development of the railroads. It acted as a key strategic town during the American civil war, developing into an industrial stronghold at the turn of the century.

Today, its famous terminal in the centre of the town proudly celebrates its history. Saved in the 1970s and restored as a hotel complex; its stunning 85-foot dome and old signage and original train tracks just outside the building have earned it a place on the national historic register.

Tourists can take a trip on one of the restored trains, or ride the incline train up to the Lookout Mountain that watches over the city.

Outside the old terminal in the centre of town, Chattanooga typifies the urban landscape of many small US cities. As in many once-thriving cities which experienced a decline in manufacturing after the second World War, urban planning in the mid-20th century pushed (mostly white) people out to the suburbs, with the result that the downtown area was left neglected.

Even today, central Chattanooga has that curious sleepy feel that characterises many downtown areas of American towns and cities, with its wide empty streets and commercial buildings.

But Chattanooga has undergone urban rejuvenation in the last 30 years in a bid to encourage people back to the city.

It also has a distinctly relaxed vibe. So much so that it takes me a couple of hours to realise that I have changed time zones somewhere in the two-hour drive from north Tennessee to Chattanooga, and am now back in the eastern time zone, where it is five, not six, hours earlier than Ireland.

I stop for coffee at Mean Mug coffeehouse on Main Street, gladly stepping in from the heat into the cool, air-conditioned environment.

“I’m looking for Trump supporters,” I tell my waiter, Cody, brightly as I order from the coffee menu.

“You won’t find them here,” he replies with a smile, as he gestures towards his customers, mostly young millennials intently working on their laptops.

Many of the customers who drift in and out are wearing sporty T-shirts, a sign of the outdoors culture that permeates the city. The dramatic mountains and lakes surrounding Chattanooga offer some of the best hiking and climbing in the region, attracting outdoors enthusiasts.

Chattanooga is one of a growing number of US towns that have become something of a liberal enclave within a conservative state.

Across the country, urban centres like Austin in Texas, Atlanta in Georgia and, to an extent, Birmingham in Alabama, have developed as pockets of liberalism within Republican areas.

Symptomatic in part of a growing urban/rural divide within states that is shaping American politics, educated millennials and liberal retirees are gravitating towards urban centres – often clustered around universities – that offer a welcome space for their more socially liberal values. It also helps that the cost of living is much lower than cities such as New York, Washington or San Francisco.

Just as it does for many in the coffee house, coffee soon glides into lunch. In a moment of virtue I go for the red quinoa power bowl – a steal at $7, compared to cities like DC. The menu also offers the ubiquitous “biscuit” – a scone-like southern staple, often accompanied by gravy, which I’m learning is a cornerstone of the southern diet.

Jim, a sprightly looking retiree, sits beside me at the coffee bar. Originally from New Orleans, he moved to Chattanooga two years ago after spending many years in Nashville, where he ran his payroll company. “In Nashville everyone was a musician or actor; here they’re all into tech and the latest health trend. This is not typical Tennessee, which is mainly conservative and Republican,” he says.

‘Trump is an embarrassment’

I ask him about Trump but he says he’s not political. “Washington is a bubble,” he replies, a sentiment that I hear frequently as I move further away from the US capital.

Jake, who has just graduated from the nearby University of Tennessee at Chattanooga, is working on his Apple computer. He tells me he is trying to break into the city’s emerging tech scene, and is working on a business plan with his friend. They’re hoping to tap venture capital.

He is unequivocal in his views on Trump. “He’s an embarrassment. I argue with my parents all the time about it. I think it is a generation issue. Most of my friends can’t stand Trump, but most of their parents do.”

As the lunchtime trade dies down, and lunch drifts into afternoon, I figure it’s time to go. Outside, the late afternoon heat is beginning to die down. I rejoin the network of freeways that connect the towns and cities of inland America.

As I head south on the I-59, passing briefly through the state of Georgia, my satnav informs me that I’ve crossed into Alabama. The clock goes back an hour as I pass into the central time zone. A sign appears at the side of the freeway in case there’s any mistake: “Sweet Home Alabama.”