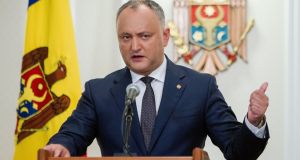 Moscow has accused tiny Moldova of undermining their relations and threatening the stability of the region and Europe, after it banned Russian deputy prime minister Dmitry Rogozin from its territory.

The spat comes amid a sharp deterioration in ties between the two former Soviet states and rising tension between Moldova’s pro-EU government and its president Igor Dodon, a strong Kremlin ally who wants stronger links with Moscow.

Mr Rogozin, an outspoken Russian nationalist, was furious when Romania barred his plane from its airspace last Friday, as he tried in vain to reach Moldova on a planned trip to its Moscow-backed separatist area of Transdniestria. He is banned from the EU for supporting Russia’s 2014 annexation of Crimea from Ukraine.

“Just wait for an answer, scumbags,” he tweeted when his travel plans were thwarted. Later, he deleted the message but warned that “instead of emotions there will be actions”.

His bid to visit Transdniestria to “celebrate 25 years of Russian peacekeeping” there was called a provocation by Moldovan officials who are often angered by Mr Rogozin’s inflammatory remarks, including his recent description of a Moldovan government delegation to Moscow as behaving “like gypsies”.

In declaring Mr Rogozin persona non grata, Moldova’s foreign ministry denounced his comments as “insulting . . . denigrating and lying” and accused him of “brutal interference in the domestic affairs of our state”.

Accusing Moldova of “provocations” against “senior Russian representatives, peacekeepers and ordinary citizens”, Moscow said the country seemed to be joining the West’s “hysterical and hopeless campaign . . . against the Russian Federation.”

“All this causes legitimate indignation and will receive an adequate response. Furthermore . . . such dangerous actions could have a serious destabilising influence on the general situation in the region and Europe as a whole,” Russia’s foreign ministry said.

Kremlin spokesman Dmitry Peskov said Moldova’s decision to ban Mr Rogozin was “much worse” even than tough new US economic sanctions on Russia.

Mr Dodon – who has talked about scrapping Moldova’s trade agreement with the EU in favour of restored economic ties with Moscow – called the government’s ban on Mr Rogozin “an act of great political stupidity”.

“I don’t know if the government is acting on its own account or, more likely, is being controlled like a puppet from across the ocean. What is certain is that today it has involved Moldova in a diplomatic and geopolitical conflict that is unprecedented in the last quarter of a century,” he wrote on Facebook.