US vows to defend allies from ‘unpredictable’ Russia 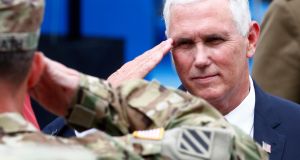 The White House hopes for better ties with Moscow but will oppose any Kremlin aggression against US allies and will not be swayed by an order to slash Washington’s diplomatic staff in Russia, US vice-president Mike Pence said on Monday.

He met the presidents of the three Baltic states in Estonia at the start of a trip that will include stops in Georgia and Montenegro – all countries that feel pressure from Moscow – as Russia responded to US sanctions by demanding that 755 US diplomats and support staff in the country stop work.

“To be clear, we hope for better days, for better relations with Russia, but recent diplomatic action taken by Moscow will not deter the commitment of the United States of America to our security, the security of our allies, and the security of freedom-loving nations around the world,” Mr Pence said in Tallinn.

Estonia, Latvia and Lithuania – which regained independence from Moscow in 1991 – have been alarmed by Russia’s annexation of Crimea and undeclared war against Ukraine, prompting Nato to deploy multinational battalions on their territory and in Poland and to step up military exercises in the Baltic region.

Russia also often conducts war games in the region, and last week launched its first naval drills in the Baltic Sea with China. Nato states are also concerned about the very large “Zapad” exercises due in western Russia and Belarus in September.

Mr Pence sought to allay lingering fears about US president Donald Trump’s commitment to Nato – which he derided as obsolete during his election campaign before softening his criticism from the White House.

“A strong and united Nato is more necessary today than at any point since the collapse of communism . . . And no threat looms larger in the Baltic states than spectre of aggression from your unpredictable neighbour to the east,” Mr Pence said.

After talks with the three Baltic leaders, he said: “Under President Donald Trump, the United States stands firmly behind our . . . pledge of mutual defence – an attack on one of us is an attack on us all.”

Estonian premier Juri Ratas discussed the possibility of stationing US surface-to-air missiles in his country with Mr Pence, but said they “didn’t talk about a date or time”.

Mr Pence was due on Monday evening in Georgia, where war games involving more than 2,800 troops from Nato states, Ukraine, Armenia and the host country are now under way.

Russia fought a brief war with Georgia in 2008 and keeps thousands of troops in two separatist-held regions of the country, Abkhazia and South Ossetia.

From Georgia Mr Pence will fly to Montenegro, which became Nato’s 29th member in June, eight months after an alleged coup attempt that prosecutors claim was masterminded by Russian agents.