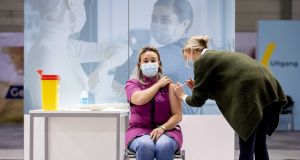 The Netherlands has begun its Covid-19 vaccination programme, nearly two weeks after many European Union nations.

Sanna Elkadiri, a nurse at a care home for people with dementia, was the first to receive a shot of the Pfizer-BioNTech vaccine at a mass vaccination centre in Veghel, 120 kilometres south east of the capital Amsterdam.

The Dutch government has come under fierce criticism for its late start to vaccinations.

Dutch prime minister Mark Rutte told legislators in a debate that authorities had focused preparations on the easy-to-handle vaccine made by Oxford University and AstraZeneca, which has not yet been cleared for use in the EU, and not the Pfizer-BioNTech vaccine.

The Pfizer-BioNTech vaccine, which requires ultra-cold storage before it is used, is the only shot that has been approved so far by the EU’s medicines agency.

The European Medicines Agency on Wednesday was considering approving another coronavirus vaccine, one made by Moderna.

“I’m very disappointed that we are two weeks behind other countries,” Mr Rutte said in the Dutch parliament.

The Netherlands is in the midst of a five-week tough lockdown imposed when infection rates were spiking across the country.

In recent days, infection rates have been edging lower, but the country’s public health institute said on Tuesday that the lockdown has not yet produced a clear effect on infection rates.

Nearly 12,000 people are confirmed to have died of Covid-19 in the Netherlands since the pandemic started, though the true number is higher because not all people who died were tested.

Andre Rouvoet, chairman of the umbrella organisation of local health authorities, welcomed the first vaccination, which was aired live on Dutch television.

“It is symbolic of the hundreds of thousands — millions — of vaccinations that will be administered in the Netherlands in coming months,” he said.

Most of the Balkan nations are still waiting for their first vaccines to arrive, with no firm timeline for the start of their national inoculation drives.

What is already clear is that Albania, Bosnia, Kosovo, Montenegro, North Macedonia and Serbia — home to some 20 million people — will lag far behind the EU’s 27 nations and Britain in efforts to reach herd immunity by quickly vaccinating a large number of their people.

North Macedonian epidemiologist Dragan Danilovski compared the current vaccine situation in the Western Balkans to the inequalities seen during the sinking of the Titanic.

“The rich have grabbed all the available lifeboats, leaving the less fortunate behind,” Danilovski told broadcaster TV 24.

Such sentiment as the world faces its gravest health crisis in a century has gained traction in the Western Balkans — a term used to identify the Balkan states which want to join but are still not part of the EU.

It is actively being stoked by pro-Russian politicians in a region sandwiched between Western and Russian spheres of influence.

“I felt as if the bottom fell out of my hopes for a return to a normal life,” 50-year-old Belma Djonko said in Sarajevo, the Bosnian capital, describing the emotional fallout of hearing that thousands of doctors, nurses and the elderly across the EU had received the first doses of a vaccine developed by American firm Pfizer and Germany’s BioNTech while her war-ravaged country is kept waiting.

Many Balkan nations are pinning their hopes on Covax, a global vaccine procurement agency set up by the World Health Organisation and global charity groups to address rising inequities of vaccine distribution.

Covax has secured deals for several promising Covid-19 vaccines but, for now, it will only cover doses to inoculate 20 per cent of a country’s population.

Serbia is the only Western Balkan nation to receive vaccine shots so far, getting deliveries from Pfizer-BioNTech and the Russian-developed Sputnik V vaccine.

However, Serbia does not have enough doses to begin mass vaccinations, as only 25,000 shots of the Pfizer-BioNTech vaccine and 2,400 of the Russian vaccine have arrived.

Serbia’s vaccination programme began on December 24th, three days before the EU, when Serbian prime minister Ana Brnabic received a dose in a bid to increase public trust in the vaccine, as many Balkan governments also struggle to counter a strong anti-vaccination movement.

The EU’s executive arm, the European Commission, recently agreed on a €70 million package to help Balkan nations get access to the vaccines, on top of 500 million euros the bloc has already contributed to Covax.

“Throughout the pandemic, the EU has shown that we treat the Western Balkans as privileged partners,” said EU enlargement commissioner Oliver Varhelyi.

Chinese authorities on Wednesday imposed travel restrictions and banned gatherings in the capital city of Hebei province, which surrounds Beijing, in the latest escalation of measures to stave off another coronavirus wave.

The province, which entered a “wartime mode” on Tuesday, accounted for 20 of the 23 new locally transmitted Covid-19 cases reported in mainland China on January 5th, more than the total of 19 cases in the province in the three previous days.

Hebei also accounted for 43 of 64 new asymptomatic cases – people infected with the SARS-CoV-2 virus but not yet showing symptoms of COVID-19.

Hebei’s capital, Shijiazhuang, a city of 11 million that reported 19 confirmed and 41 asymptomatic cases, ramped up countermeasures. It will require all travellers to present a negative nucleic acid Covid-19 test within the past 72 hours before boarding a train or an airplane, the Shijiazhuang Zhengding International Airport said on Wednesday.

The city has also launched a mass testing drive, shut its main long-range bus terminal, banned gatherings and ordered residential compounds to keep out non-residents. The head of China’s National Health Commission led a team to the city on Tuesday, the official Xinhua news agency said on Tuesday.

The total number of new mainland cases, including those originating from overseas, fell to 32 from 33 a day earlier - a small fraction of what China saw at the height of the outbreak that emerged from the central city of Wuhan in late 2019. The country does not count asymptomatic patients as confirmed Covid-19 cases.

The head of the World Health Organisation on Tuesday said he was “very disappointed” that China still had not authorised a team of international experts tasked with examining the origins of the coronavirus into the country.

The 10-person team was due to set off in early January in order to probe early cases of the coronavirus.

Japan’s Covid-19 cases reached a new daily record on Wednesday, as the government faced mounting pressure from health experts to impose a strict state of emergency for the Tokyo greater metropolitan area.

Rising infections have driven the Tokyo and surrounding areas to the highest level of a four-stage alert, prompting regional governors to call for a declaration of emergency that prime minister Yoshihide Suga is expected to announce on Thursday.

The health ministry held a meeting of infectious disease experts on Wednesday, the second in as many days. They have called for stricter and longer countermeasures, while Suga has sought a more limited response to avoid damaging the economy.

“Even if we take strong measures immediately, it will be difficult to bring the Tokyo metropolitan area down to stage 3 by the end of January,” Takaji Wakita, chief of the National Institute of Infectious Diseases, told reporters after the meeting.