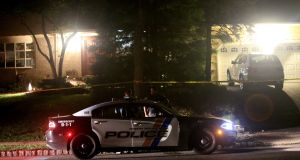 A self-described anti-feminist lawyer found dead is the suspected gunman who killed the son of a US federal judge, officials said.

A day earlier, a gunman posing as a FedEx delivery man went to the home of US District Judge Esther Salas in North Brunswick, New Jersey, and started shooting, wounding her husband, defence lawyer Mark Anderl, and killing her son, Daniel Anderl.

Judge Salas was in another part of the house and was unharmed, said the officials.

Den Hollander had a gender-equity lawsuit, filed in 2015, that was being heard by Judge Salas involving a young woman who wanted to register for the military draft. He also mentioned the judge in writings posted online, deriding her as a ladder climber who traded on her Hispanic heritage to get ahead.

A package addressed to Judge Salas was found with Den Hollander’s body, the officials said.

He also wrote of posing as a FedEx delivery man to speak with a young girl, the same tactic the gunman apparently used at the door to the judge’s family home.

Den Hollander was best known for unsuccessful lawsuits challenging the constitutionality of “ladies night” promotions at bars and nightclubs. His litigation, and willingness to appear on TV, earned him spots on The Colbert Report and MSNBC.

New Jersey governor Phil Murphy called the shooting “a senseless act” and said: “This tragedy is our latest reminder that gun violence remains a crisis in our country and that our work to make every community safer isn’t done.”

Judge Salas, seated in Newark, New Jersey, was nominated by President Barack Obama and confirmed in 2011. Before that, she served as a magistrate in New Jersey after working as an assistant public defender for several years.

Born in California to a Cuban immigrant mother and Mexican father, she spent most of her childhood in Union City, New Jersey.

After helping her family escape a devastating house fire, she acted as her mother’s translator and advocate, foreshadowing her career in law as she argued her family’s case to welfare officials, according to a 2018 magazine profile.

In the profile, she spoke of her son possibly following his parents into the legal profession.

“He’s been arguing with us since he could talk — practising his advocacy skills,” Judge Salas told New Jersey Monthly. “I don’t want to dissuade him, but I was pulling for a doctor.”

Just last week, she had been appointed to hear an ongoing lawsuit brought by Deutsche Bank investors who claim the company made false and misleading statements about its anti-money laundering policies and failed to monitor “high-risk” customers including convicted sex offender Jeffrey Epstein.

She staggered their sentences so one of them could be available to take care of their four children.

In 2017, she barred federal prosecutors from seeking the death penalty against an alleged gang leader charged in several Newark murders, ruling the man’s intellectual disability made him ineligible for capital punishment. She later sentenced him to 45 years in prison. – PA