Letter: Conundrum of how to save lives while not destroying livelihoods is formidable 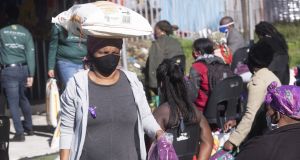 The Western Cape provincial capital usually attracts millions of tourists each year because of its scenic beauty and landmarks, affordable gourmet food and fine wines, and vibrant culture and nightlife.

But the government’s introduction of some of the world’s most severe Covid-19 safety measures on March 27th – many of which remain in place today – has put paid to all that.

A prohibition on the sale of alcohol, bans on international and interprovincial leisure travel and the closure of leisure accommodation has brought Cape Town’s multi-billion-euro tourism sector to its knees.

Having seen how healthcare systems in Italy and Spain were overwhelmed by coronavirus earlier this year, the government speedily introduced a hard lockdown that most people initially backed.

Given the dysfunctional state of many hospitals, there was no arguing with the notion that restrictions were needed to slow the spread of the disease and give South Africa time to prepare for the predicted deluge of infections.

But as is the case in other countries, South Africa’s lockdown is having severe consequences that are driving economically vulnerable people deeper into poverty. In a recent survey conducted nationwide by South Africa’s Foundation for Human Rights, 80 per cent of interviewees cited hunger as the biggest challenge they faced during the lockdown.

Although the government introduced an emergency grant to help workers left unemployed by temporary business closures during lockdown – more than 600,000 tourism sector employees applied for it – the initiative ended in June.

It is hard to overstate the importance of tourism to job creation in South Africa, which is expected to have a 50 per cent unemployment rate when the next quarterly statistics are released.

In 2017 the sector was responsible for almost 725,000 jobs nationally and just over 113,000 of those were in Cape Town, according to official statistics.

But a report released in May by Cape Town Tourism has warned the pandemic and lockdown could eliminate more than 90,000 of the city’s tourism jobs by November. Furthermore, the perception that many of the government’s lockdown restrictions are poorly thought out, and inconsistently applied, is also feeding Cape Town residents’ growing discontent.

Dublin-born chef Liam Tomlin, who owns six restaurants around the city, is one of those who questions the government’s tightening of regulations in response to rising Covid-19 infections, which on Monday stood at 364,328 confirmed cases – and 5,033 deaths.

After months of being banned, sit-down meals in restaurants were allowed again from mid-June under level three of the five-stage risk-adjusted lockdown system. But last week president Cyril Ramaphosa reintroduced limitations that restaurateurs say are crippling their chances of reviving their operations.

Under the revised lockdown regulations, restaurants can serve guests under strict safety conditions, but the reintroduction of the alcohol ban and curfew, which runs from 9pm to 4am, leaves businesses such as Tomlin’s “in an impossible position”, he says.

“Many restaurants do most of their trade in the evening. If our staff must be home by 9pm, they need an hour to clean up and another hour to get home, leaving us with one-to-two hours of service in our peak earning period. Add in the alcohol ban, and we are struggling to pay wages, never mind make a profit.”

Another anomaly in the government’s approach to managing tourism during the pandemic sees business travellers allowed to use only hotels and B&Bs. Inexplicably, it has put private self-catering accommodation like that found on Airbnb off limits.

If the outbreak can be brought under control over the coming months, in theory local tourism at least could bounce back

The only silver lining to the situation facing South African tourism is that the country is grappling with Covid-19 in its off-season. So, if the outbreak can be brought under control over the coming months, in theory local tourism at least could bounce back before the southern hemisphere summer season kicks in.

“It is early days but really looking like hospitalisation and deaths are stabilising and even potentially showing an early decline [in the province],” said Dr Keith Cloete, the head of the Western Cape’s health department.

The news has sown a seed of hope for the local tourism businesses. But the conundrum of how to save lives while not destroying livelihoods remains a formidable one for the government if it wants to successfully open the sector up.