The 27 member states of the European Union sign off on a €1.8 trillion package to fund the next seven years of spending and inject funds into struggling economies to help them weather the devastation of the coronavirus pandemic. Video: Reuters 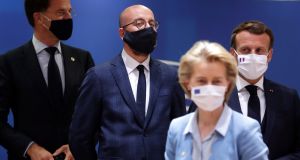 The 27 member states of the European Union this morning signed off on a €1.8 trillion package to fund the next seven years of spending and inject funds into struggling economies to help them weather the devastation of the Coronavirus pandemic.

The summit was one of the longest ever, and leaders negotiated through the night once again on Monday before announcing a deal had been reached at 5.30am on Tuesday.

“It has been a very challenging number of days negotiating this package but it has been worthwhile. The solidarity displayed throughout this summit is something that I think will stand Europe in good stead into the future,” Taoiseach Micheál Martin said after the deal was clinched.

“The Covid-19 challenge is unique, its impact in terms of economic social and political life is very severe and it necessitated a response of this scale and magnitude.”

The recovery package involves a €750 billion in grants and loans that will be funded by jointly-guaranteed borrowing by the European Commission, the first time this has been done and a proposal that faced significant resistance from a group of so-called frugal northern member states led by the Netherlands.

“This recovery fund that is based on European solidarity is indeed a historic change, a historic step for Europe. This is the first time we have been able to set up this budget capacity at this level,” French president Emmanuel Macron said.

Today we’ve taken a historic step, we all can be proud of.

But other important steps remain. First and most important: to gain the support of the European Parliament.

Nobody should take our European Union for granted.
It is our common responsibility to deliver. pic.twitter.com/b5xX18tugn

The deal secures a €5 billion ‘Brexit Adjustment Reserve’: funds for the sectors and countries worst-hit by the effects of Britain leaving the EU, of which Ireland can expect to receive a substantial share.

The Taoiseach also said there were protections for Common Agricultural Policy payments.

“From the Irish perspective we’re particularly happy that there is significant funding to protect the Common Agricultural Policy which has always been a significant factor in Ireland’s negotiations with Brussels,” Mr Martin said.

To persuade the northern states, rebates on their national contributions to the budget were increased to Austria, Denmark, the Netherlands, and Sweden, as significant net payers. Germany opted to keep its rebate at the same level. The rebate system, which was pioneered by Britain, had initially been proposed to be scrapped altogether after Brexit.

Various programmes proposed by the Commission were also cut to bring down the overall size of the budget, including on health and subsidies to help economies transition towards carbon neutrality, which European Commission president Ursula von der Leyen described as “regrettable”.

But she said the EU could not be accused of doing “too little, too late” this time.

“We negotiated four long days and nights, more than 90 hours, but it was worth it,” Ms von der Leyen said.

“This agreement sends a concrete signal that Europe is a force for action,” Mr Michel said at a dawn news conference

“It is about a lot more than money. It is about workers and families, their jobs, their health and their well-being. I believe this agreement will be seen as a pivotal moment in Europe’s journey, but it will also launch us into the future.”

French president Emmanuel Macron said the deal was historic and said he was convinced the recovery plan and budget could meet the challenge of the coronavirus pandemic.