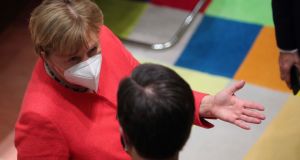 A draft document submitted to the national leaders of the European Union member states to try to break deadlocked talks on the seven-year budget and pandemic recovery fund includes limits to Common Agricultural Policy payments and reduced rural development funds.

The proposal was eked out in painstaking negotiations that ran night and day since Friday in a tussle between budget-conscious wealthy northern states and a broad group of countries advocating for a generous stimulus package that would counteract a severe recession.

Under the proposal, a €5 billion “Brexit adjustment reserve” will be set aside in the common EU budget for “unforeseen and adverse consequences in member states and sectors that are worst affected” by the United Kingdom’s exit from the European Union.

Ireland had pushed for this measure along with other member states, arguing that the existing plan did not sufficiently take into account the potential impact of Brexit on top of the economic damage of the pandemic.

The document allocates €77.1 billion for the European agricultural fund for rural development, a reduction compared with previous proposals though not as much as feared, while Ireland is in line for €300 million in funds targeted towards member states “facing particular structural challenges in their agriculture sector”, according to the document.

Regarding Common Agricultural Policy funds for farmers, the proposal includes limiting payments to €100,000 per beneficiary.

This capping of direct payments for large farmers would “be introduced on a voluntary basis”, according to the document, which notes that it will apply only to the basic income support for sustainability and that member states can subtract all labour-related costs from the amount.

In all, “the share of the Cap expenditure that is expected to be dedicated to climate action shall be 40 per cent”, according to the document.

The proposal was drawn up in a bid to break deadlock between member states, which were divided by deep disagreements over the size of the pandemic rescue fund and how the money should be distributed.

The new proposal foresees €390 billion of grants, down from an initial €500 billion, and €360 billion euros of low-interest loans to be given to member states, according to need.

A new allocation formula calculates the need of member states according to the actual economic impact of the pandemic as well as on past economic data, which could help Ireland secure a greater proportion of funds if it is badly hit by the downturn.

The group of frugal northern states led by the Netherlands had pushed for cuts and oversight of spending as the price for their sign-off on the recovery fund, which member states including Ireland have argued is essential to prevent the EU falling into a severe depression.

Dublin business features in leak of US treasury documents

1 Coronavirus: 396 more cases as public is urged to help protect ‘older and vulnerable’
2 The Sack of Balbriggan: The burning of a town that shocked the world 100 years ago
3 Coronavirus: Germany and Iceland look set to be taken off ‘green list’
4 Lockdown measures and rising anger in Madrid as Covid takes hold again
5 Civil War rape which led to pregnancy recalled in new TV documentary
Real news has value SUBSCRIBE