Erdogan orders Istanbul’s Hagia Sophia to be converted into mosque 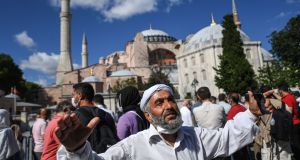 People gather outside Hagia Sophia in Istanbul to celebrate after a top Turkish court revoked its status as a museum, clearing the way for it to be turned back into a mosque. Photograph: Ozan Kose/AFP via Getty Images

Turkey’s president Recep Tayyip Erdogan has ordered Istanbul’s Hagia Sophia, one of the world’s greatest examples of Byzantine Christian architecture, to be turned into a mosque.

The move ends the former Byzantine cathedral’s 85-year stint as a museum and fulfils a long-held dream of some of Mr Erdogan’s nationalist and conservative supporters.

But it also threatens a row with the global heritage organisation Unesco and risks sparking anger from Christian communities across the world – as well as drawing the ire of Turkey’s foreign allies.

Mr Erdogan on Friday issued a decree announcing that the sixth century former basilica would become the property of Turkey’s directorate of religious affairs and be opened to Muslim prayer.

The move came shortly after the country’s highest administrative court annulled a 1934 decision by Mustafa Kemal Ataturk – Turkey’s founding father – that secularised the building in a compromise between the Muslims and Christians who had each used it as a place of worship in centuries past.

Mr Erdogan had thrown his weight in recent months behind a long-running grassroots campaign to reconvert the former cathedral into a mosque – a status that it held for almost five centuries after the 15th-century Ottoman conquest of Constantinople.

The US, Greece and Russia had all called on Turkey not to alter the status of the Hagia Sophia, which was built by the eastern Roman emperor Justinian and completed in 537.

The decision was met with dismay by the Russian Orthodox Church.

“We have to admit that the concern of millions of Christians was not heard,” Vladimir Legoyda, a spokesperson for the Church, said in comments to local news agencies following the ruling. “Today’s court decision shows that all calls for the need for extreme delicacy in this matter have been ignored,” he added.

“Ankara will now be seen through the eyes of the whole world as a violator of inter-religious balance and lose its authority as an important regional player,” Konstantin Kosachev, chairman of the foreign affairs committee in Russia’s senate, said of the decision. “[It] will cause an extremely negative reaction across the entire Christian world.”

Ieronymos, the head of the Orthodox church in Greece, said: “Hagia Sophia is not only a Christian monument built by Justinian but a world monument with a supreme place in the history of civilisation. Where civilisation comes under attack, the downfall of human dignity follows.”

Following Friday’s court decision – but before the Turkish president’s announcement – Unesco issued a plea for Turkey to “engage in dialogue” before making any changes to the monument. The Hagia Sophia forms part of a Unesco world heritage site, a status that carries a legal requirement not to make any changes that would impact upon its “outstanding universal value”.

Mr Erdogan had previously angrily rejected such calls as foreign meddling in his country and given his blessing to requests for the Hagia Sophia to be reconverted.

Supporters of the change had argued that turning the building back into a mosque would properly reflect the history of the Ottoman Empire, the predecessor of the Turkish republic, as well as Turkey’s modern-day status as a Muslim-majority country.

But the Ecumenical Patriarch Bartholomew, the Istanbul-based spiritual leader of the world’s Orthodox Christians, had warned that it risked harming interfaith relations. He argued that the Hagia Sophia’s museum status prompted “mutual understanding and solidarity between Christianity and Islam” and that turning it into a mosque risked causing “confrontation and conflict”.

Senior government officials have stressed that the Hagia will still be open to tourists, just as mosques across Turkey are open to visitors.

“Opening up Hagia Sophia to prayer does not mean that local or foreign tourists will not be able to visit,” Ibrahim Kalin, a senior adviser to Mr Erdogan, told the state-run Anadolu news agency on Thursday. “So it is not in question that a part of the world’s heritage will be lost.”

However, art historians and archaeologists fear that conversion to a mosque may lead to its stunning mosaics and frescoes being obscured from view in order to comply with interpretations of Islam that forbid the depiction of humans and animals.

During its almost five centuries as a mosque under the Ottoman Empire, the decorative panels showing Jesus Christ, his mother Mary, and Byzantine rulers were covered with paint and plaster. More recent conversions of Christian churches in Turkey have seen curtains and carpets used to obscure images of human forms.

The timing of Mr Erdogan’s decision to revive the debate about the Hagia Sophia prompted some analysts to suggest that he was using the issue to divert public attention from the economic fallout of the coronavirus crisis, which is expected to plunge the country into a deep recession this year.

A survey by the pollster Metropoll found that 44 per cent of the public also saw the debate as a diversion tactic. – Copyright The Financial Times Limited 2020