Adultery is decriminalised in India after 158 years 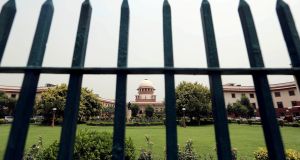 India’s supreme court in New Delhi: Adultery is no longer punishable with a five-year prison sentence, a fine or both. Photograph: Anindito Mukherjee

India’s supreme court has ruled that adultery is no longer a criminal offence.

Striking down the 158-year old British colonial-era law, the five-judge bench unanimously declared on Thursday that section 497 of the Indian penal code was “archaic, arbitrary and unconstitutional”.

Adultery had been punishable with a five-year prison sentence, a fine or both.

“It’s time to say that a husband is not the master of his wife,” India’s chief justice, Dipak Misra, said in a written judgment. His fellow judge, Rohinton Nariman, declared that “ancient notions of man being perpetrator and women being the victim no longer hold good”.

Another member of the five-judge bench, D Y Chandrachud, overruled his father’s 1985 supreme court judgment upholding adultery. “The adultery law perpetuates the subordinate status of women, denies [them] dignity [and] sexual autonomy and is based on gender stereotypes” he said in his judgment.

The judges were responding to a petition filed by Joseph Shine, a 41-year-old Indian businessman living in Italy, in which he claimed that India’s adultery law discriminated against women by holding an “erroneous presumption” that they were the property of men.

“Married women are not a special case for the purpose of prosecution of adultery,” Shine’s 45-page petition maintained,

This was the second colonial law that the supreme court struck down this month after overturning a 157-year-old statute that outlawed gay sex in India.

The law criminalising adultery decreed that as “seducers” women were punishable, but were not legally permitted to file a complaint against a husband who indulged in extra-marital affairs.

And though there are no official statistics on convictions for adultery, lawyers and legal activists said the law was invariably misused by husbands during matrimonial disputes.

The battle to scrap the adultery law has been fought over many decades. It was challenged in 1954 by a female petitioner demanding to know why women could not be prosecuted for adultery, but the supreme court rejected the plea.

Thereafter, the court rejected identical pleas at least twice – in 1985 and 1988 – stating in the former instance that “the stability of marriage is not an ideal to be scorned”. At the time, a woman had petitioned the supreme court asking for the right to file a complaint of adultery against her husband’s unmarried lover.

The court dismissed her petition on the grounds that it was a “crusade by a woman against another woman”.

The government counsel had stated in court that India’s traditions and ethos accorded “paramount importance” to the institution of marriage, which needed legal protection.