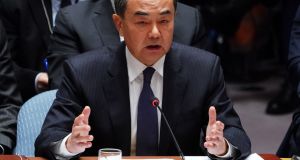 Chinese foreign minister Wang Yi: “We did not and will not interfere in any country’s domestic affairs.” Photograph: Don Emmert / AFP

China has rejected accusations by US president Donald Trump that it was “meddling” in the US mid-term elections because of an ongoing trade war. Chinese media have described his allegations as a ploy that would not help him win support in the November polls.

The US leader told the UN Security Council meeting he was chairing that China was interfering because he was “the first president to ever challenge China on trade” and spoke of Beijing’s admiration for this “very large brain”.

The Global Times, a nationalist tabloid, said Mr Trump’s trade war was harming his own core support. “The truth is that the people currently in office at the White House are hitting out at their own supporters while placing the blame on China,” it said.

“China did not initiate this trade war, but it will not hesitate to seek revenge every time trade friction upgrades occur,” it said in an editorial.

Mr Trump did not provide any evidence for his accusations, although he did later tweet some paid editorial content from the Des Moines Register arguing China’s side in the trade war as proof of his claims.

Tensions between China and the US are extending to other areas. Washington imposed sanctions on the Chinese People’s Liberation Army after it bought weapons from Russia in contravention of new rules. Beijing recalled its most senior naval officer from a visit to the US and also cancelled talks that had been scheduled. They also blocked a US Navy ship from making a port of call in Hong Kong.

The paper said that linking China and the US mid-term elections was a “creative campaign strategy” and “a canvassing tactic”.

“His goal here is to turn the issue into a game by targeting China to help him and the GOP attract more votes,” it said.

“If the system currently used to handle the mid-terms is so fragile that it can be tampered with by powerhouses like China and Russia, and also by smaller countries, then the system itself is obviously nothing short of a farce. The accusations against China hold no ground whatsoever,” the paper said.