Paris-born singer with Armenian family origins wrote 1,300 songs up to his death at 94 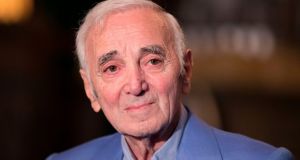 Tributes are pouring in to Charles Aznavour, the great French popular singer, who died early on Monday at his home in southern France, aged 94.

Known as “the French Frank Sinatra”, Aznavour wrote 1,300 songs and claimed to have sold 180 million records. His tunes La Bohème and Emmenez-moi are known to virtually every French person.

Outside of France he was best known for his 1974 hit, She.

Aznavour sang of all life’s great themes: the ache of ambition, falling in and out of love, sensuality, lost youth, what it is to be worn down by routine. In the 1972 song Comme ils disent,he sang sympathetically about homosexuality, long before it was fashionable to do so. And he was the bard of his ancestral homeland, Armenia.

Aznavour broke all records for longevity as a performer, having started at the age of nine and continuing until his death. He gave his last concert in Osaka, Japan, on September 19th and was to have sung in Brussels later this month.

“I cannot not live, and I live on stage. I am happy on stage, and that shows,” he said in his last television interview, with France 5’s C à vous, three days before his death. He and his sister Aida had decided they would both live to 100, he added. “She has no right to let go, and I don’t either.”

Antoine Genton, who interviewed Aznavour last Friday night, said the singer was “smiling, generous, attentive . . . He reacted to news with a sharp eye . . . He had plenty to say. His answers were clear, pointed, trenchant as always. He had a lot of humour.”

On September 18th, Aznavour was the guest of President Emmanuel Macron and first lady Brigitte Macron at a dinner at Versailles for the crown prince of Japan. On learning of the singer’s death, Macron tweeted: “Charles Aznavour accompanied the joys and sorrows of three generations. His masterpieces, his timbre and his unique influence will survive him for a long time.”

The singer Enrico Macias spoke of his “enormous grief”, adding, “My heart aches. I want to cry. I don’t know what to do. For me he is immortal.”

The LGBT website Komitid said Comme ils disent was “Delicate, full of understatements and double entendres imbued with modesty and melancholy, the song went against the trend of the time, when people sang about homosexuality to mock it.”

Aznavour was born in Paris’s sixth district on May 22nd, 1924. His parents were refugees from Turkish persecution and were waiting for visas to the US. They fell in love with Paris and decided to stay. They named their baby boy Shahnourh Varinag Aznavourian, but changed his first name to Charles and shortened the family name.

Aznavour was fiercely attached to Armenia. In 1975 he co-authored Ils sont tombés, a tribute to the victims of the 1915 Armenian genocide. After the 1988 earthquake he donated proceeds from his hit song Pour toi Arménie to reconstruction. A square was named after him in Yerevan. Aznavour became an Armenian citizen in 2008. The following year, he was named Armenian ambassador to Switzerland.