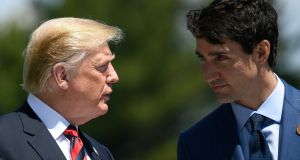 The deal came after a weekend of frantic talks to try and preserve a trade agreement that has stitched together the economies of Mexico, Canada and the United States but that was on the verge of collapsing.

After more than a year of tense talks and strained relations between US president Donald Trump and Canadian prime minister Justin Trudeau, negotiators from both sides came to a resolution just before a midnight deadline (5am Irish time) set by the White House.

The eleventh-hour agreement was punctuated by a frenetic Sunday, with Canada’s leaders teleconferencing throughout the day with top US officials in Washington. Mr Trudeau convened a 10pm Cabinet meeting in Ottawa to brief officials on the deal, as Jared Kushner, one of Trump’s closest advisers, and Robert Lighthizer, the president’s top trade negotiator, hashed out the final details.

In a joint statement, Mr Lighthizer and Canada’s foreign affairs minister, Chrystia Freeland, said the new deal “will give our workers, farmers, ranchers and businesses a high-standard trade agreement that will result in freer markets, fairer trade and robust economic growth in our region.”

The trilateral deal will no longer be called Nafta, they said, but will be named the “United States-Mexico-Canada Agreement.” The deal represents a win for Trump, who has derided Nafta for years and threatened to pull the United States from the pact if it was not rewritten in America’s favour.

Overhauling trade deals has been one of Mr Trump’s top priorities as president and he has used tariffs and other threats to try and force trading partners to rewrite agreements in America’s favour.

US industry groups cheered the deal on Sunday night. “Manufacturers are extremely encouraged that our call for a trilateral agreement between the United States, Canada and Mexico has been answered,” Jay Timmons, president of the National Association of Manufacturers. –New York Times