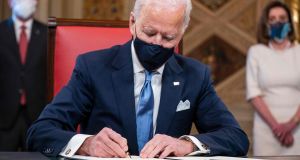 US president Joe Biden signs three documents at the US Capitol after being sworn in as the 46th president of the US. Photograph: Jim Lo Scalzo/Pool/AFP via Getty Images

US president Joe Biden has signed an executive order paving the way for the US to rejoin the Paris climate agreement, reversing one of the signature moves of the Trump presidency.

In one of his first official actions following his inauguration as the 46th president of the US on Wednesday, Mr Biden signed the order in the Oval Office, after arriving at the White House for the first time as president.

Mr Trump withdrew from the international climate agreement in June 2017, with the US officially leaving the compact late last year.

The new order was to be deposited with the UN later on Wednesday, and the US will officially become a party to the accord in 30 days’ time.

The landmark agreement, which was signed by Democratic president Barack Obama in late 2015, introduced binding emission targets on countries in a bid to limit global warming to below 2 degrees Celsius.

Mr Biden was also asked about a letter left by his predecessor Donald Trump for him in the White House. “The president wrote a very generous letter,” he said, but declined to give details of its content.

Mr Biden also signed an order mandating mask-wearing at a federal level – one of several orders he was due to sign on Wednesday.

Earlier in the day, Mr Biden was sworn-in as the 46th president at a ceremony at the US Capitol shortly before noon local time.

“Democracy is precious. Democracy is fragile. At this hour, my friends, democracy has prevailed,” he said.

“Few people in our nation’s history have been more challenged or found a time more challenging or difficult than the time we’re in now,” he said. He added that “we must reject the culture in which facts themselves are manipulated and even manufactured”.

But he offered a vision of hope, as he spoke of the “uniquely American way – restless, bold, optimistic”, and called on his fellow Americans to “set our sights on the nation we can be”.

“We must end this uncivil war that pits red against blue, rural versus urban, conservative versus liberal,” he implored. “We can do this if we open our souls instead of hardening our hearts. If we show a little tolerance and humility, and if we’re willing to stand in the other person’s shoes.”

Mr Biden and new US vice-president Kamala Harris then travelled to Arlington Cemetery, where they laid a wreath at the grave of the unknown soldier. They were accompanied by three previous presidents, Mr Obama, Bill Clinton and George W Bush, and their partners. Mr Trump was not present, breaking with tradition by refusing to attend his successor’s inauguration. Instead, he left Washington, DC, earlier on Wednesday, vowing to return “in some form”.

Speaking to journalists as he boarded the Marine One helicopter, Mr Trump said: “We’ve had an amazing four years. I just want to say goodbye, but hopefully it’s not a long-term goodbye, we’ll see each other again.”

Mr Trump, who never conceded the November 3rd presidential election, did not mention Mr Biden by name in his final remarks as president on Wednesday morning, when he touted his administration’s record. He then flew to his Mar-a-Lago retreat in Florida.

Mr Biden took the presidential oath, administered by US chief justice John Roberts, with his left hand resting atop a five-inch heirloom Bible that has been in his family for a century.

After the inauguration ceremony at the US Capitol, Mr Biden and his family opted to walk the last few blocks of Pennsylvania Avenue to their new home.

Mr Biden assumes the presidency amid a deeply divided country reeling from a battered economy and a raging coronavirus pandemic that has killed more than 400,000 Americans.

The inauguration also took place two weeks after a mob of Mr Trump’s supporters stormed the Capitol, in an incident that left five dead.

The inauguration itself, one unlike any other in US history, served as a stark reminder of both the tumult that defined the Trump era as well as the pandemic that still threatens the country.

The violence prompted the Democratic-controlled US House of Representatives to impeach Mr Trump last week for an unprecedented second time, accusing him of incitement after he exhorted his backers to march on the building to press false claims of election fraud in the US presidential election in November last.

Amid warnings of possible renewed violence, thousands of armed National Guard troops circled the Capitol in an unprecedented show of force. The National Mall, typically packed with throngs of supporters for the ceremony, instead was filled with nearly 200,000 US flags. Attending dignitaries wore masks and sat several feet apart.

Mr Biden’s running mate, Ms Harris, the daughter of immigrants from Jamaica and India, became the first black person, first woman and first Asian American to serve as vice-president after she was sworn in at the ceremony by US supreme court justice Sonia Sotomayor, the court’s first Latina member.

Although his remarks at the inauguration ceremony were directed primarily at domestic problems, Mr Biden also delivered a message to the rest of the world. He promised to repair alliances frayed by Mr Trump and act as a strong partner for peace, progress and security. He made no specific mention of high-stakes disputes with North Korea, Iran and China.

Mr Biden’s inauguration as the 46th president was the zenith of a five-decade career in public service that included more than three decades in the US Senate and two terms as vice-president under Mr Obama. At 78, he is the oldest US president in history.

Mr Biden has vowed to bring the full weight of the federal government to bear on the coronavirus crisis. His top priority is a $1.9 trillion (€1.5 trillion) plan that would enhance jobless benefits and provide direct cash payments to households.

But it will require approval from a divided Congress, where Democrats hold slim advantages in both the House and Senate. Ms Harris was scheduled to swear in three new Democratic senators late on Wednesday, creating a 50-50 split in the chamber with herself as the tie-breaking vote.

While Mr Biden has laid out a packed agenda for his first 100 days, including delivering 100 million Covid-19 vaccinations, the Senate could be consumed by Mr Trump’s upcoming impeachment trial, which will move ahead even though he has left office. Additional reporting: – Reuters