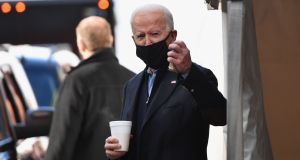 US president-elect Joe Biden after meeting with transition advisers in Wilmington, Delaware, on Monday. Photograph: Angela weiss/AFP via Getty Images

US president Donald Trump is expected to issue dozens of pardons in the final hours of his presidency as he prepares to leave Washington on Wednesday.

Mr Trump, who has not been seen publicly for a week, has spent his final days as president meeting with advisers in the White House. He is due to fly to Florida on Wednesday morning ahead of Joe Biden’s inauguration as president.

While it is not uncommon for outgoing presidents to issue pardons – Bill Clinton controversially granted clemency to 170 people as his presidency drew to a close – typically they are recommended and discussed with the department of justice. However, Mr Trump has instead sought counsel from friends and family members.

He previously pardoned or granted clemency to individuals who had been indicted in connection with the Russia investigation, including Paul Manafort and Roger Stone. Despite speculation that he could pardon himself, or issue pre-emptive pardons to his children, it is not yet clear if he will do so.

Mr Trump remained out of sight on Monday – a federal holiday to mark Martin Luther King day. Incoming president Biden and his wife Jill volunteered at a food shelter in Philadelphia, while vice-president-elect Kamala Harris and her husband helped out at a food bank in Washington.

Ms Harris, who officially resigned her senate seat on Monday, spoke about the legacy of Mr King, noting that his fight for justice “is still a fight in America”.

Friends and associates of the outgoing president have been invited to attend an early-morning ceremony at Joint Base Andrews on Wednesday morning ahead of Mr Trump’s departure for Florida on Air Force One. He will become the first president in modern times not to attend the inauguration of his successor.

Meanwhile, Washington remained under heavy security ahead of Wednesday’s inauguration as the fallout from the January 6th attack on the US Capitol continued.

An inauguration rehearsal was interrupted on Monday morning after personnel were ordered to evacuate the Capitol complex. However, the triggering event was quickly revealed to have been a small fire under a bridge a few blocks from the Capitol building.

Defence officials said they were vetting members of the National Guard who have been dispatched to Washington ahead of the inauguration after it emerged that former members of law enforcement participated in the riot in the Capitol.

Up to 25,000 National Guards – a reserve, part-time force that operates in each of the 50 states – are being sent to Washington to help with security. The enhanced screening measures are being taken to ensure there are no inside threats to the president’s safety, though officials said there was no evidence of specific threats.

At least one army reservist was arrested in connection with the January 6th riots. He was described as an “avowed white supremacist” in court documents.

Federal authorities are also looking for a woman who told her partner that she had stolen a laptop from Ms Pelosi’s office during the Capitol riot. She said she had planned to give the device to a friend in Russia, who was due to pass it to authorities in Russia but the plan fell through.

“The last four years have been unforgettable,” she said in a six-minute video filmed at the White House “Be passionate in everything you do, but always remember that violence is never the answer and will never be justified,” she added as she highlighted her “Be Best” anti-bullying initiative. “Do not lose sight of your integrity and values.”

The former model is the first presidential spouse in modern time not to show her successor, Jill Biden, around the White House ahead of the transition of power.

Doug Emhoff, the husband of Ms Harris, has officially adopted the twitter handle “second gentleman” as he prepares to become the first male vice-presidential spouse.