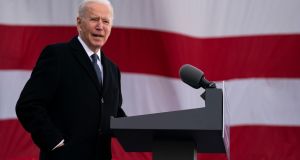 The current militarisation of downtown Washington is a propaganda gift to autocrats everywhere. This, they will say of the khaki vans and camouflaged guards, is where liberalism ends: civil strife; a besieged state. The grimmest thing about the show of strength is that it is probably warranted.

It is not as if the world’s authoritarians need the reputational boost. New data confirm that China’s economy did more than merely avoid recession last year. Its Covid-19 vaccines have takers from Indonesia to Hungary via the Gulf and, neatly inverting the Sino-Soviet split of the 1970s, Beijing has struck an investment deal with the EU. Those sounds you hear are the first notes of transatlantic discord over the emergent superpower.

Such is the world that confronts Joe Biden as he takes office on Wednesday. Not since 1945, when Harry Truman felt the weight of the “moon, the stars and all the planets”, has more rested on a new US president.

If he governs well, mending the economy, dispensing vaccines, and calming the home front, he can stem the trickling away of US (and by extension western) credibility since the millennium. What started with the US’s “forever wars” and worsened with the 2008 financial crash reached a negative apotheosis with the still-raging pandemic. The west needs a success story for its own morale as much as its outward reputation.

If, on the other hand, Biden fails, the sense of Chinese momentum will start to feel less like form and more like destiny. Countries with systems somewhere between multi-party democracy and absolutism might come to see the second as this century’s strong horse. Within the US, the soil will be fertilised for a populist comeback – an abler Donald Trump – in the 2024 election, with all that implies for domestic peace and intra-western comity. There is a circularity to decline.

Readers are entitled to yawn when every presidency is vaunted as a hinge moment for the world. Looking back, perhaps it did not matter all that much whether George HW Bush or Bill Clinton won the 1992 election. Bar the handling of Russian sensitivities post-cold war, that decade did not require miraculous feats of statecraft. The US had moral credit to spare, and such supremacy that it was neither easy nor worthwhile to identify the second mightiest country.

But if the hype has been too breathless in the past, the easier mistake now is to understate things. Whether we look back on the early 21st century as the moment of eclipse for the west, or just a bad run, depends in large part on Biden’s performance.

As a rule of thumb, a democracy is in good health to the extent that its politics do not matter

A man whose selling point was his nondescriptness, and an implied promise of respite between the stress of Trump and a bolder Democrat to come, will have to do more. His expansive schemes for fiscal relief and pandemic control suggest that he understands this. But they are schemes. He, and liberal democracy itself, will be judged on a factor that has been elusive over the past two decades: competence.

To make his inheritance yet worse, Biden takes charge of the US at the most awkward phase in the superpower lifecycle. Its relative strength has waned but not so much as to elevate, even remotely, another leader of the free world. The US remains the anchor of the international system.

Its domestic life is still, to a frankly weird extent, the planet’s binge watch (hence protests in Paris about a police killing in Minneapolis). Its failures become those of liberalism entire, at least in the agitprop of the autocratic world. In the past, America’s compensation for these burdens was a commensurate amount of power. Now, the two are gallingly misaligned.

In that sense, perhaps not even 1945 does justice to the gauntlet awaiting Biden. As cowed as Truman felt, the US was a coming force, and an internally coherent one. He was working with the grain of history. A human lifetime later, the US has a smaller share of world output and counts a peaceful transition of presidential rule as a comment-worthy achievement. A large majority of Republicans in the House of Representatives voted not to certify the election of Biden, even after the Capitol siege.

As a rule of thumb, a democracy is in good health to the extent that its politics do not matter. Ideally, the spread of outcomes from a new president should be a slightly better healthcare system or a slightly worse one. Biden’s spread is nothing less than the shoring up of liberalism’s good name, or the extension of its malaise, until it hardens into fate. There is an air of the last chance about this presidency. – Copyright The Financial Times Limited 2021