At least three people have died in a blast in central Madrid and early information is indicating that it was likely to have been caused by a gas leak. The explosion occurred on Calle Toledo, near Puerta de Toledo. Video: Reuters 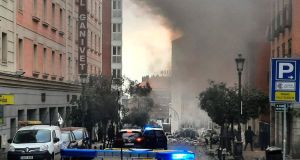 Smoke rises from a building and rubble scattered in Toledo Street following a explosion in downtown Madrid, Spain on Wednesday. Photograph: Europa Press via AP

At least two people died and several were injured when a building in a central Madrid belonging to the Catholic Church collapsed on Wednesday after an explosion, mayor Jose Luis Martinez-Almeida told reporters.

Initial investigations suggested that the blast in Calle de Toledo, a street leading out from the city centre, had been caused by a gas leak, he said.

Smoke billowed out of the collapsed building and rescue workers evacuated elderly people from a nearby nursing home.

A church official said one church volunteer was missing.

The building was a complex that provided residential training for priests and also gave meals to homeless people, a neighbour said. – Reuters